Ranjith: Reform of the Reform 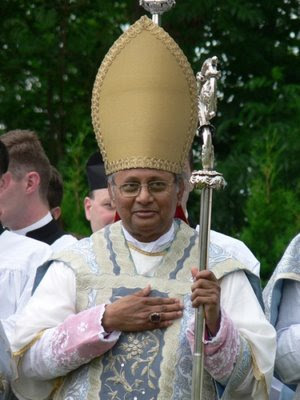 CWNews - A key Vatican official has called for "bold and courageous" decisions to address liturgical abuses that have arisen since the reforms of Vatican II.

Archbishop Malcolm Ranjith, the secretary of the Congregation for Divine Worship, cites a flawed understanding of Vatican II teachings and the influence of secular ideologies are reasons to conclude that-- as then-Cardinal Joseph Ratzinger said in 1985-- "the true time of Vatican II has not yet come." Particularly in the realm of the liturgy, Archbishop Ranjith says, "The reform has to go on."

Archbishop Ranjith, who was called to the Vatican personally by Pope Benedict to serve as a papal ally in the quest to restore a sense of reverence in the liturgy, makes his comments in the Foreword to a new book based on the diaries and notes of Cardinal Fernando Antonelli, who was a key figure in the liturgical-reform movement both before and after Vatican II.

The writings of Cardinal Antonelli, Archbishop Ranjith says, help the reader "to understand the complex inner workings of the liturgical reform prior to an immediately following the Council." The Vatican official concludes that implementation of the Council's suggested reforms often veered away from the actual intent of the Council fathers. As a result, Archbishop Ranjith concludes, the liturgy today is not a true realization of the vision put forward in the key liturgical document of Vatican II, Sacrosanctum Concilium (doc).

Some practices which Sacrosanctum Concilium had never even contemplated were allowed into the Liturgy, like Mass versus populum, Holy Communion in the hand, altogether giving up on the Latin and Gregorian Chant in favor of the vernacular and songs and hymns without much space for God, and extension beyond any reasonable limits of the faculty to concelebrate at Holy Mass. There was also the gross misinterpretation of the principle of "active participation."

The Sri Lankan prelate argues that it in order to carry out a "reform of the reform," it is essential to recognize how the liturgical vision of Vatican lI became distorted. He praises the book on Cardinal Antonelli for allowing the reader to gain a better understanding of "which figures or attitudes caused the present situation." This, the archbishop says, is an inquiry "which, in the name of truth, we cannot abandon."

While acknowledging "the turbulent mood of the years that immediately followed the Council," Archbishop Ranjith reminds readers that in summoning the world's bishops to an ecumenical council, Blessed John XXIII intended "a fortification of the faith. " The Council, in the eyes of Pope John, was "certainly not a call to go along with the spirit of the times."

However, he continues, the Council took place at a time of great worldwide intellectual turmoil, and in its aftermath especially, many would-be interpreters saw the event as a break from the prior traditions of the Church. As Archbishop Ranjith puts it:

Basic concepts and themes like Sacrifice and Redemption, Mission, Proclamation and Conversion, Adoration as an integral element of Communion, and the need of the Church for salvation--all were sidelined, while Dialogue, Inculturation, Ecumenism, Eucharist-as-Banquet, Evangelization-as-Witness, etc., became more important. Absolute values were disdained.

Even in the work of the Consilium, the Vatican agency assigned to implement liturgical changes, these influences were clearly felt, the archbishop notes:

An exaggerated sense of antiquarianism, anthopologism, confusion of roles between the ordained and the non-ordained, a limitless provision of space for experimentation-- and indeed, the tendency to look down upon some aspects of the development of the Liturgy in the second millennium-- were increasingly visible among certain liturgical schools.

Today, Archbishop Ranjith writes, the Church can look back and recognize the influences that distorted the original intent of the Council. That recognition, he says, should "help us to be courageous in improving or changing that which was erroneously introduced and which appears to be incompatible with the true dignity of the Liturgy." A much-needed "reform of the reform," he argues, should be inspired by "not merely a desire to correct past mistakes but much more the need to be true to what the Liturgy in fact is and means to us and what the Council itself defined it to be."

Archbishop Ranjith's 10-page Foreword appears in the English-language edition of a book entitled True Development of the Liturgy is written by Msgr. Nicola Giampietro, who serves on the staff of the Congregation for Divine Worship. It will be available in September from Roman Catholic Books.
at February 24, 2009

But I can imagine much snarling and gnashing of teeth among the Liberals! What price on Elana Curti doing a dirty on the Pope? :)

He should make his comments known in every parish and religious community. Not just in a book. It won't do any good!.

I think we also need to look more closely at the changes that were made to the prayers of the Mass - not just in the ordinary but the propers as well. It has become increasingly clear that the Consilium under Msgr Annibale Bugnini had a very clear agenda that was in many ways contrary to the sensus fidelium and saw their task as doctrinal although they did not represent it as such.

I once supported the 'Reform of the Reform' - but I now think the Novus Ordo is, in its very texts, flawed. I think the RotR might be helpful to lead the older generation which has been deluded by a false Spirit of Vatican II gently towards a greater orthopraxy and orthodoxy.

However, for myself I wish now only for the traditional Latin Mass - free from the doctrinal changes of the 1960's and free from the liturgical accretions of the 1970's. I want the Mass of my ancestors and of the Saints.

God bless the Holy Father and Archbishop Ranjith!
And thanks Fr. for posting this piece. God bless you.

What a great Archbishop and faithful servant of the Church. He is 100% right on all the matters raised and I look forward to getting hold of a copy of this forthcoming book and reading the Archbishop's 'foreward'.

This for example: 'Basic concepts and themes like Sacrifice and Redemption, Mission, Proclamation and Conversion, Adoration as an integral element of Communion, and the need of the Church for salvation--all were sidelined, while Dialogue, Inculturation, Ecumenism, Eucharist-as-Banquet, Evangelization-as-Witness, etc., became more important. Absolute values were disdained'. Couldn't agree more - seen it, heard it, suffered it in many Parishes around the UK over too many years - and now at Blackfen, we have some real hope for a truely Catholic reform rooted in the most Sacred Liturgy of the Ages. The future is bright indeed! Let's not be afraid!

Oh that we had more good Shepherds like Archbishop Ranjith. Ever thought of moving to England your Grace?

Why oh why has it taken so long? I often wonder if we had had the internet 40 years ago whether the so called 'spirit of Vat II' would ever have taken off.

I wonder if The Tablet will review this book ?

Thank you Ab. Ranjith! Good to see that the Holy Father has some supporters after all the negative press in recent weeks.

And to the rest of the Hierarchy: "What is your excuse...?"

PeterHWright shame on you - Ha.. ha.. haaaa....! You know full well that the Tablatistas will run for the hills foaming at the mouth rather than even hold let alone review a copy of this book! Anyway what possible 'spin' could they use to 'diss' this book in their rag? Perhaps something along the lines of.....

"It's The Bishop - The Inquisition all over again".

It has been alleged, says our special Tablet reporter on the ground, that Archbishop Ranjith has ordered all Parish Priests to re-install kneelers in their Churches and insist their parishioners accept the most Holy Eucharist on the tongue only.

The Tablet has been inundated with cries for help from an army of special ministers (well, er... nine actually) who simply do not know what their role is any longer as they cannot be active 'partici-pants' in the new style Latin Masses. They feel unloved, un-inclusive and excluded from church, on the 'spiritual' scrap heap so to speak, due to Ranjith's far reaching reform of the reform.

No more handing out communion insisting it goes in the hand, patting babies on the head and saying "Bless you dear... oh isn't she sweet". Smiling and grinning at the long line of communicants as they chitter chatter among themelves catching up on news waiting to receive the body and blood of Our blessed Lord Jesus Christ.

'This new instruction is divisive and has split our parish', says Poppy, an extraordinary minister in her seventies, who regularly takes communion to dear old folk at the local Bingo Hall, and manages the local pub aswell before lunchtime on a Sunday. 'They see me as their local priest sort of' says Poppy, 'and I simply don't know what I'm going to tell them about this kneeler and communion on the tongue business. I don't know any Latin and they don't neither. What's it all about and what business has this Archbishop so-and-so anyway to tell us how we should do our 'liturgy', I mean who does he think he is, what a nerve.... we was so happy before all this stuff'.

You are right, of course. A Tablet book review would probably be very much along those lines.

However, in order to give a balanced picture, The Tablet [which of course always tries to give a balanced view of things] would no doubt also mention the backward looking Archbishop Ranjith, the hopelessly out of touch prelate and enthusiast of the so called "Benedictine reform" which in fact was nothing other than a blatant attempt by Pope Ratzinger to turn back the clock and rewrite most of Vatican II.

This tiresome man, with all his misguided ideas about "tradition", has written the foreword to the book, so you can see The Tablet would have to do the sensible thing and warn its readers.

Peter, are you sure that the Tablet has more than one. Just wondering in case the plural was a typo error!

No, I'm not absolutely sure that there's more than one reader. In fact, I hope there isn't. But you know the way it is; you hear rumours.

To be praying in the very same words of saints such as St. Francis Xavier, St. Philip Neri, St. Pius X and Padre Pio is very consoling.