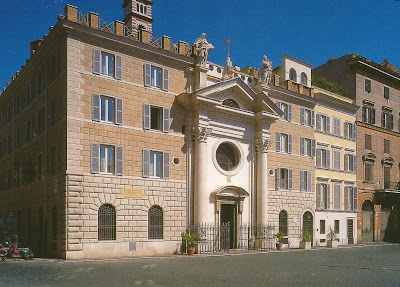 Bridgettine Convent, Rome
A BRITISH nun who helped to hide Italian Jews from the Nazis in wartime Rome has been put forward as a candidate for sainthood.

Mother Ricarda Beauchamp Hambrough played a vital role in saving the lives of more than 60 Jews by smuggling them into her convent. Her order, the Bridgettines, founded in the 14th century, has now sought permission from the Vatican to examine her life and writings for evidence of “heroic virtue”, the first step to beatification and, ultimately, canonisation. She could join three other British women being considered by Rome for sainthood.

Ricarda’s case is in its earliest stages and requires evidence of two miracles. Yet with successful progress,it could make her the first British female saint since 1970, when Pope Paul VI canonised three women among martyrs who died in the Protestant Reformation.

Ricarda was born Madaleina Catherine in London in September 1887 and was received into the Roman Catholic church in Brighton HERE!!!!! at ST MARY MAGDALEN!!!!!!! at the age of four after her parents’ conversion to the faith. Little is known about her childhood, but as a young woman she was influenced by Father Benedict Williamson, a Benedictine monk, and in 1912, aged 24, she travelled to Rome to become a nun. With the Bridgettines she took the religious name “Ricarda” and was soon chosen as the assistant to Blessed Mary Elizabeth, the abbess.

During the second world war, on hearing that the Germans were exterminating Jews, Pope Pius XII secretly ordered the religious houses of Rome to shelter them from persecution, according to Vatican records.

A spokeswoman for the Bridgettines confirmed yesterday that Ricarda was central to the hiding of refugees, including Italian Jews, communists and Poles: “We helped many during the war and Mother Ricarda helped Mother Elizabeth to hide them.”

Although Pius was criticised after his death for not speaking out against the Holocaust,Ricarda’s efforts to save Jews is likely to be viewed favourably by the Vatican, as it was a factor in her abbess’s own swift elevation to beatification.

A QUARTET OF GOODNESS

Mother Ricarda is one of four British women who are potential candidates for sainthood.

The others being considered by the Vatican are Elizabeth Prout, a 19th-century nun who worked in the slums of Manchester; Mary Potter, a Londoner who founded an order of nursing nuns, in Nottingham during the same period; and Margaret Sinclair, a 20th-century nun who died of tuberculosis after tending to the poor of Edinburgh.

Thanks for keeping us posted. In time may there be a Blessed Raymond Blake!

I wouldn't want to be a member of a Church with him as a Beatus.
I know him, all those squandered Graces, no chance!

But Gem, say a prayer for "the process" to run speedily.

What an inspiring story. I have to confess I hadn't even heard of this wonderful nun. Such good news to hear in these days with all the terrible press about catholic/jewish relations. I'll put the cause into Oscott's prayer book in the morning. Thank you for this post.

Wow... your very own parish saint.

I am filled with a "holy envy" Father. I will also pray for the cause to progress swiftly.

Can we get a picture of her, Father Ray - and the appropriate prayer?

Owl,
I have been desperately looking for a photograph, biography etc.
Things are at such an early stage but presumably more will be available when her cause is presented.

You betcha, Fr. Blake. [Didn't know you were a Groucho fan too!]

Ven. Margaret Sinclair died as a Poor Clare. There is a CTS booklet about her.

You may be interested to know that here at Southwark Archives we have a fair amount of information on Fr Benedict Williamson who was keen to re introduce the male version of the Briggitines into GB. He lived in Rome after the first world war and was the first priest to introduce devotion to Theresa of Liseux before canonisation and before Mgr Vernon Johnson. He was also a chaplain in the first world war and wrote up his memoirs on the war under the title "Happy Days in Flanders" Happy Days was his nick name it seems !
Incidentally the cause of Cornelia Connelly was introduced but seems to be either dormant or dropped. Papers are at Southwark also.

How wonderful, and how exciting!

I see you are on top of the story, Father! I had just read this elsewhere and, seeing Brighton mentioned, I thought "This will be of interest to Fr. Blake". Great to hear that she was baptized at St. Mary Magdalen...

You have mentioned in the past how Brighton has historically attracted persons of dubious reputation, so it is good to see that God is looking to balance the scales!

The Brigettines are a wonderful Order. Hospitality is their charism and they certainly extend that hospitality with great joy and serenity at their Casa on the Piazza Farnese, Rome (pictured in Fr's article) as well as at their houses in this country.

God bless them and their potentially future beata.

Great news Fr. !
Will be praying for her cause.

How fantastic - a Beatified Brighton Bridgettine! How timely, too. I wonder how the media would get round that one? Will pray for the swift progress of the cause.