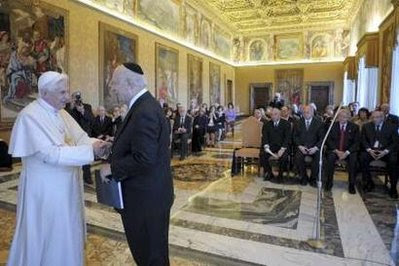 Pope Benedict XVI condemned Thursday, Feb. 12, all forms of anti-Semitism in his first face-to-face-meeting with Jewish leaders since the start of a row over a bishop who said Jews were not killed in Nazi gas chambers.

The pope told the delegation of the Conference of American Jewish Organizations that the Catholic Church remained "profoundly and irrevocably committed to rejecting all anti-Semitism and to continuing to build good and lasting relations between our two communities.

"It is beyond question that any denial or minimization of this terrible crime is intolerable and altogether unacceptable," the pontiff said at the Vatican, referring to the mass-murder of Jews by the Nazis during World War Two.

During the private audience Benedict also said he was "preparing to visit Israel, a land which is holy for Christians as well as Jews, since the roots of our faith are to be found there." The visit is provisionally set for May, the AFP news agency reported.

The pontiff was addressing a delegation of about 60 representatives headed by Rabbi Arthur Schneier, a Holocaust survivor who in April 2008 hosted the pontiff at his New York synagogue.

Several Jewish leaders speaking before the meeting said they hoped Benedict would use the opportunity to announce steps against British-born Bishop Richard Williamson, who in a television interview in late January denied Jews were killed in Nazi gas chambers.

It makes one wonder really whether informed Jews were or are so shocked by thye Pope's action, as oppposed to Williamson's words, as many have suggested. Never has there been an suggestion of the cancellation of the Israel visit for example, in fact some rabbis have been quite supportive of the Pope, the threats of breaks in dialogue with Holy See seem to be short lived.

What I find worrying, almost as worrying as holocaust denial, is the use of the holocaust by non-Jews as a political tool, it is the exploitation of 6,ooo,ooo innocent deaths. I think is precisely what the secular press have done, so often with the encouragement of "liberal" Catholic commentators who have their own agenda, in order to attack the Holy Father, this is what Rabbi Levan indicates.
at February 12, 2009

As the devil himself is the 'boss' of the secular media, is it really any wonder that they remain intolerant of anything that is good in this world and do all they can to whip up storms in everybody's tea-cups! The 'father of all lies' wants to damage any and all relations between the Holy See and the Jewish Faith leadership as anything that is pleasing to his arch enemy God Our Father in Heaven is simply intolerable. Let's always keep one eye open and try and see the spiritual battle raging all around us! St Michael the Archangel protect us and intercede for us.

This is why the blogosphere rules! No media interference! - yet, anyway.

At the Abbey at Beuron in Baden Wurtemberg there is a memorial to St Edith Stein ornamented with a large Sheild(Star)of David. As we know she was an eminent philosopher born of Jewish parents in Breslau who as a Catholic nun was gassed at Auschwitz. Perhaps we should ask for her prayers to assist in putting to rest what has been a misunderstanding between friends.

Let us not forget the OTHER six million who also died: the religious, those who belonged to politically unpopular parties, th gypsies, homosexuals, handicapped. I don't like it when the other 6 million are forgotten.

I never thought I'd agree with gemoftheocean, but I totally agree on that point - why are the other millions always left out or mentioned only as an afterthought??

What was particularly heinous about the Nazi extermination of the Jews is the particular preoccupation with wiping every last Jew from the face of the earth, burning away the very memory of them as though they never existed, and doing so by applying state-of-the-art technology to a campaign of industrialised mass murder.

Let us also not forget the millions that perished under Stalin - a far greater number than what Hitler did with the Jewish population.

We should not fall into the complex that the Jewish genocide is the ONLY Holocaust to be remembered. There is a far more heinous holocaust that takes place in every country and in the womb...