The Battle 2: Can God be trusted? 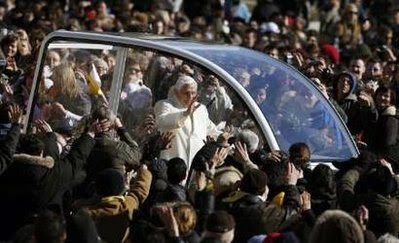 The battle, or maybe it is a war, is ultimately about whether we can know God and trust what he has revealed. Most of the teaching of the Second Vatican Council was issued in the form of a Decree, solemn teaching meant to inform the Church and individuals. Four documents were issued as were issued as "Dogmatic Constitutions", these were intended not just to teach but to form Catholic theology, to identify what was de fide, of the faith.

It is widely known that the young Father Joseph Ratzinger was one of the major authors behind the Dogmatic Constitution on the Word of God, Dei Verbum. In it modern biblical science is examined such as text and form criticism, the examination whether a document is meant to be a story, a myth or an historic truth, it examines the authorship of scripture by God and man, and the relationship between Scripture and Tradition. It sought to answer Modernism and Literalist Fundamentalism.
Modernism: basically said that scripture was a purely human invention, which means it is powerless, and God does not touch humanity.
Literalist Fundamentalist: would have scripture dictated by God directly into the ear of its human author, which is simply nonsensical, it denies a Catholic understanding of Grace and human co-operation with it.
Practically every word the Pope has uttered or written since his election as Pope has been on God's revelation to Man. His emphasis on the Hermeneutic of Continuity says that God has been present in his Church for two thousand years and can be indeed be trusted, we have not been left orphans. His book Jesus of Nazareth is continually stressing that the Gospels can be trusted, which is so important when most theologians and most scripture scholars follow the Protestant line of the unreliability of scripture. His Wednesday catechesis on the Fathers and St Paul stress the continuity of the Church from Christ to the present day, and God's continued guidance. The Synod on the Word of God, which was a bit lack-lustre, but more importantly the eventual release of his response to it, is crucial to this Papacy and I am sure will emphasise God speaking to his people.

I really do believe that we are entering a period in the history of the Church which touches on issues as important as the Christological controversies of the first millenium. It is about the very nature of God himself. The Pope alone, and those who gather with him, stands for the continuation of the Catholic faith: God speaking directly through Tradition and Scripture, God touching directly the lives of the faithful through the sacraments, Man being saved by coming into contact with God in his Church.

The Pope's almost manic ecumenical work with the Orthodox, his inter-religious dialogue, his reconciliation of Traditionalist groups, of talks with groups of "Catholic" Anglicans are all about strengthening the position of those who believe God is "knowable".

The battle, the war, is about whether we can know and trust God.

Being a theologian of no small repute himself, it is not surprising that the Holy Father has frequently stressed the proper role of theologians in the Church. Their role is to study, inform and enlighten the Church and it is to be done in humility and prayerfulness in communion with the Magisterium.

One gets the impression from some theologians that they are on a different plane from the rest of the faithful and even ‘know more than the Pope’ - or God, for that matter. This comes from Pride and is reminiscent of the “non serviam” of Lucifer.

One of the things I found endearing about St. Teresa of Avila was her profound humility in the face of the revelations she had and the knowledge she had been privileged to receive. She was most reluctant to even document this and only did so under obedience to her spiritual directors.

In her introduction to The Interior Castle she says: “I submit all my writings to the judgment of those learned men by whose commands I undertake them. That it will be the fault of ignorance, not malice, if I say anything contrary to the doctrine of the Holy Roman Catholic Church, may be held as certain.”

Would that all ‘learned men’ in the Church today showed the same humility!

What are we to make of miracles and the mysteries described in scripture?

In one sermon I heard about a miracle, it was just rationalised into something mundane. Yet the eucharist itself is a miracle performed daily and we know that we are receiving God himself, though these days it is too often performed in such a way as to make this hard to perceive.

Perhaps this is one of the points of such mysteries - they are meant to show us how much about existence lies beyond rational understanding and cannot, should not, be explained away.

Now why would anyone want to deny this, I wonder?

Is that why they were called Dogmatic Constitutions - because they identified de fide teachings whether or not the documents themselves invoked infallibility?

". . . most theologians and most scripture scholars follow the Protestant line of the unreliability of scripture."

The Protestant line is that Scripture is reliable, to the exclusion of everyting else at that.

John Henry Newman fought no less hard against Modernism as a Protestant than he did as a Catholic.

Micahel, I suspect you never read mainstream 20th century Protestants.
Not sure I would call Newman a Protestant.

According to Philip Trower, the watershed for Modernism among the Protestants was Schleiermacher (1768-1834).

Actually, Newman was very much a Protestant in his early days. He believed the Pope was the Antichrist. You couldn't have got a cigarette paper between him ans Ian Paisley.

And Newman, like the best Protestants, had a Catholic attitude to truth:

I really did believe that for contemporaray Protestants Scripture is the complete and final word of God, entirely to be trusted. Those American "Bible Colleges" teach this. I thought that Catholics believe that God continues to teach His people through the Church, utterly different from the Protestant view that Scripture reveals all and forever.

Mary,
Try reading Bultman and Schweitzer, and maybe other Protestants who went in search of the historical Jesus.

Yes Father, but why do those evangelical protestants bang on endlessly about the Word of God and disregard the idea of the Church teaching anythingat all?

Protestants believe all sorts of things. That is the whole point. Although they believe in the text of the bible alone, what they believe is a matter of personal opinion. Which gives scope for an infinite number of beliefs, because, first, there are different ancient texts from which the translation can come, and second, there are different translations, and third, many words have changed their meaning or at least their shade of meaning. And anything from Hebrew is a bit dodgy anyway because the Masoretic text is seventh to tenth century and Hebrew is written without vowels so there is scope for further ambiguity. This does not matter for Jews because there has always been an accepted body of interpretative tradition. The Catholic texts originate in the Septuagint which is pre-Christian.

Incidentally one of the earliest translations out of Greek was the Arian bishop Ulfilas's 4th century rendering into Gothic (a language something like Old Norse/modern Icelandic). Here is a 6th century manuscript page of the Silver Bible
Silver Bible page