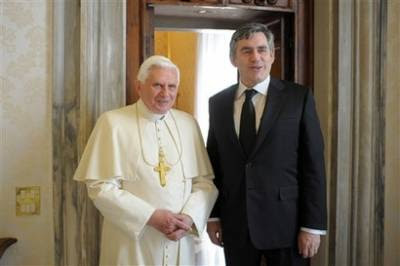 Gordon Brown dropped into see the Holy Father today, inviting him again to visit Britain.
I haven't yet seen a Vatican press release.

He wrote an article L'Osservatore Romanum saying
"From Rio to Rome, and from London to Lagos, we are confronted by one of the greatest economic challenges of our generation."
The global crisis is having an impact on the poorest people in Africa, Asia and elsewhere, the prime minister writes.
"It means hunger for millions more people, less education, and fewer health services"
"I know that the Catholic Church and His Holiness share these worries," Mr Brown continues.

"It is our common duty to ensure that the needs of the poorest countries are not regarded as an after thought, added as a moral obligation or out of a sense of guilt."
Mr Brown praises the Pope for having been one of the first subscribers to his International Finance Facility Bonds - a fund set up three years ago to provide immunisation for millions of children in the developing world.
"This is tangible proof of the common commitment of the Holy See and the United Kingdom in favour of international development.
"Thanks to this bond more than $1.6bn (£1.1bn) has been subscribed, and 500 million children will have been vaccinated between 2006 and 2011," Mr Brown concluded.
at February 19, 2009

I sometimes wonder if these meetings with heads of government don't bore the Pope to death. But he is so urbane and polite and charming.

I notice Gordon Brown still follows the New Labour party line on "targets", and uses what grammarians call the future perfect tense of the verb.

Well, very good, of course. But I always thought the future is in God's hands.

The Vatican Press Office has stated there are 'no plans' for a Papal visit to Great Britain.

I believe Pope Benedict will come to see us, at the invitation of the new Archbishop of Westminster.