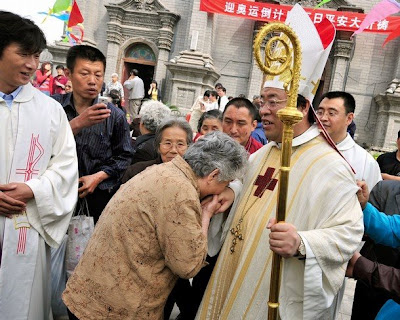 Father Zuhlsdorf has some interesting articles on the Catholic Church in China, now, after the Olympics, there has been harrassment by the authorities and renewed efforts to seperate them from Rome. The new Bishop of Beijing Joseph Li Shan, who appointment was confirmed by the Holy See seems now to be buckling under pressure.


According to information obtained by "Asian News," Bishop Li Shan has repented of his actions [his favorable relations with Rome] and has justified his behavior on the basis of the pressure that he had to undergo. In effect, precisely because of the pope’s letter and the restoration of unity among almost all the Chinese bishops, the United Front and the Patriotic Association have, for over a year, launched a series of initiatives to bring the official Chinese bishops back into obedience – to them. The United Front and the CPCA summon them constantly, require them to participate in conferences, meetings, study sessions, political sessions, making their pastoral work very difficult. The bishops are not even able to meet among themselves alone, and go from a life in solitude – at the mercy of the CPCA secretaries – to collective gatherings under the control and indoctrination of the United Front and the state administration for religious affairs.

Cardinal Zen encourages his bother bishops to faithful to Rome, and even to risk martyrdom.

In the article, Cardinal Zen says that some members of the Chinese Church are praising compromises and ambiguity. "Some people, talking to the brothers in the underground community, seem to be saying: ‘We are very smart to accept a compromise! We are in communion with the Holy Father and at the same time are recognised by the government. They give us money and we take care of our faithful. You instead prefer to go to prison; you would rather die. And then what of your faithful; abandoned, with no one taking care of them’. "The cardinal continues: "So, martyrdom has become a stupid thing? That’s absurd; a short-sighted view! Reaching compromises might make sense as a short-term strategy but it cannot last forever. Being secretly united with the Holy Father and at the same time affiliated with a Church that declares itself autonomous from Rome is a contradiction."Finally, Cardinal Zen ends with a fraternal appeal: "Dear brother bishops and priests, look at the example of Saint Stephen and all the martyrs of our history! Remember that suffering for the sake of the faith is the basis of victory even if right now it might appear as defeat."

We must pray for our Chinese brothers and sisters in Christ and ask Our Lord Jesus and Our Blessed Mother Mary to help the persecuted Catholic Church in China.