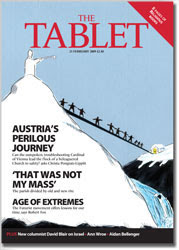 I know he is the chairman and not the delivery boy but I wrote to Sir Michael Quinlan at the Tablet telling him I could not in good conscience continue to be seen giving my support or that of my parishioners to the Tablet, therefore after selling it for a century at the back of the Church we would no longer do so. I asked to ensure it was no longer sent to us.
The reasons I cited were Robert Mickens' disrespectful treatment of the Holy Father, about which I have previously exchanged correspondence with the editor. I agreed then to give The Tablet a second chance, I must confess I enjoy their arts pages.
However with the shoddiness of Elena Curti's piece on Fr Tim and Blackfen, enough is enough.
I know of two other priests who have made the same decision today from my own diocese.
I think The Tablet might well begin to look at itself a little more critically after this weekend, especially if half the people who have commented on the blogosphere actually write to the Tablet.
We actually do need a good journal like The Tablet but it needs to be Catholic and have mainstreams orthodox Catholics on its editorial board and as contributors, the days of reactionary hippies are coming to their end and so must The Tablet in its present form. Its contributors are aging, as are its readers, if it is to survive it has to attract new readers, it will not without a clear Catholic identity.
at February 21, 2009

Out of curiosity was the Tablet ever a good paper?

I ask because I know that here in the US many people I know used to enjoy The Catholic Digest. It was akin to Reader's Digest. Solidly good spiritually, great "Catholic appeal" stories, vignettes, conversion stories etc. Good buy for the money. Then some years back it was bought out by God knows who, and turned into wishy washy pap, not worth using for birdcage liner.

They lost a huge amount of faithful readers.

I don't think Fr.Tim will be too worried about being criticisecb by the Tablet nor I suppose you be,

bless you both when people abuse you and persecute

Good decision Father.
I used to read the Tablet. I wanted something a little more intellectual and I was told try the Tablet, "that's for the intellectuals". Well I perservered for about 5 issues. I was getting more and more annoyed each time I picked it up. Then the obvious dawned on me - this isn't Catholic. Yeah I know I should have registered this after the first reading but you come to things with an openness and given that it's sold at the back of the Church you expect it to be proper in the main. I applaud your decision to torpedo your order. If my priest had done that it would have saved me alot of heartache. I find it painful to have my Church so offended by people who claim to be members but seem to enjoy wounding her at every turn.

It would be good to have a solid Catholic paper that also had articles by non-Catholics, whether deliberately examining "bones of contention", "bones of agreement" from a different point of view (scriptural inerrancy with the wee frees?), or just subjects in which being Catholic or not "don't enter innuit". It shouldn't just be devotional and catechetical and "shop".

Gem: Yes, The Tablet was a good Catholic publication years and years ago - for example, under the editorship of Douglas Woodruff. It then had the motto on its front page: "Pro Ecclesia Dei, Pro Patria".

Well done Father,pity we can't organise a boycott against some of the other rubbish on the streets.

They did it in Liverpool against the Sun and that hurt them badly,I don't know if it is still on.

Hopefully if enough priests follow your and others`example, The Tablet will now reconsider its policy about highlighting disputes at a parish level.

Such attacks (which seem to derive from ideological reasons) only make such disputes worse and discourage priests from fulfilling their vocation and cause disharmony and petty feuding in the Church in general.

Excellent decision Father. I was so shocked when I read the article on the internet.

I do hope other parishes will do the same.

Good for you Fr.

To be honest I've never understood how a priest in good conscience could allow the Tablet to be sold in his church. Every week without fail the Tablet has either an article or letter(s) which undermine the Catholic faith. A casual reader could quite easily pick it up and still think things like the churches teaching on women priests, homosexuality, gay marriages etc were still open to debate. How Catherine Pepinster lives with herself I do not know.

I gave up on the Tablet a few months back, and refused to renew the parish subscription. I was chased up after a few weeks with a "Special offer". I told them the only offer I needed was loyalty to the Holy Father and a more balanced approach in their reportage. They didn't seem to understand my fraustration with Mr Mickens constant anti-Benedict whining. This most recent and disgraceful behaviour only confirms my decision. I suggest all loyal Catholics give up the Tablet for Lent....at least!

Ma Tucker sums up exactly our personal experience with the Tablet! Years ago we took out a subscription and after a few issues it dawned on us that this just wasn't Catholic. We cancelled the subs and donated the refund to SPUC.

We need periodicals, weeklies and monthlies that support the Catholic Faith, support the Holy Father, inform and deepen the readers understanding about the Faith and support the teaching of the Magisterium. Anything less should not be passed off as Catholic and should merely be seen as a secular 'rag'.

Well done Fr Ray and others for cancelling the Parish subscriptions to those 'Fifth Columnists' whatever their guise, trying to wreck the Church from within.

There was a time when our 'Shepherds' would publish lists of 'banned' books and other writings so that the Faithful would not be led astray. Perhaps a reminder or two from the pulpit would go some way to informing the sheep who are all too often and easily lulled by the 'song of the sirens' churned out 24/7 by the secular media.

Father as a Catholic revert in the mid 1980's I discovered the Tablet. I genuinely thought it was an ecumencial gesture to have a protestant periodical in the Catholic Church. Its dissent from the magisterium was legion then as was its hatred towards the Holy Father. I never could see how a faithful priest could allow his work to be undone by such a loathsome "catholic" publication. It needs the word "catholic" removed from it and it needs to be lef to for those who want it to support their wayward faith as a mail order item unavailable from Catholic Church buildings. Its idea as being "faithful in dissent" was always ridiculous. I know some articles can be good but its constant dislike of the Pope and Church teachings should have seen its demise from Catholic support a long time ago. I am pleased Father that you have decided not to permit your faithful teaching to be not just questioned but undermined. It is a periodical for de facto schismatics and they are welcome to it.

Try L'Osservatore Romano which is the faithful organ of the Catholic Church. It is avaialable mail order via the Catholic Truth Society and more than satisfies intellectual needs. Why not have this instead of the Tablet in the Church?

When I lived in the US in the 1980s I used to enjoy the National Catholic Register which was by far the best Catholic paper I've ever seen. I gather it changed hands since then and don't know if it's as good now. The Register was feisty, loyal and twice a year had a large book supplement; Ignatius Press was just setting up so it was all pretty exciting. Why can't we have something like that?

Our new PP has taken to putting the Tablet in the back of the church but the takeup rate is very low. Most issues tend to be unsold and given away free the following week. We desperately need a readable, incisive and orthodox weekly - sadly there just isn't one.

This whole business is really about the the blog-less liberal wing of the Church trying to re-assert control and get their own back on the Catholic blogosphere. (There's also an element of the gloves finally coming off after the elevation of Joseph Ratzinger).

After a constant rattle of gunfire from most of the blogs – and the occasional grenade lobbed in by Damian Thompson – the Tablet has finally lashed out. I wouldn’t mind in the least if the Tablet counter-attacked by setting up a blog of its own to promote its spirit-of-Vatican-II vision for the Church - as long as it opened up the combox and allowed its views to be challenged.

What is dispicable is the parachuting-in of someone who, in my opinion, has stirred up divisions within a parish community. That is a very serious matter indeed and I wonder if there is a canonical disciplinary dimension which can be brought to bear. I cannot see how the Tablet's Blackfen intervention can be dismissed by its friends in high places merely as part of an honest and open debate between different theological and liturgical schools of thought.

And on Clare A's point ("We desperately need a readable, incisive and orthodox weekly - sadly there just isn't one"), well we have Saint Mary Magdalen, the Hermeneutic of Continuity, What Does the Prayer Really Say and at least 100 other high-quality Catholic dailies - all completely in line with the magisterium, free of charge and available to 1.5 billion readers worldwide. This is precisely what the Tablet seems not to like.

Francis, I have been thinking along the same line.

I believe the tablet went Protestant shortly after Vatican II. I ceased reading it in the 1970’s. The latest issue proves it is of Satan the father of lies as our Lord Jesus and God put it.

I think the reason why you don't get liberal blogs is because it would then provide hard evidence that these "Catholics" aren't Catholics at all. No liberal priest or journalist could afford to let that happen. Their strategy is to work within the system and be seen to be "challenging" and "questioning" but not openly contradicting. It's so disingenuous.

The trouble with giving up the Tablet for Lent is that it wouldn't really be a penance, but a blessed relief! It would be more in keeping with the spirit of the penitential season to take out a subscription now and cancel it on Easter Sunday. But if, like me, you are also proposing to abstain from alcohol, you would need something like heroic sanctity, as the principal effect of the Tablet is to drive one to drink.

Their economic comments are on shaky ground too.