Our Servant of God: she was an Angel 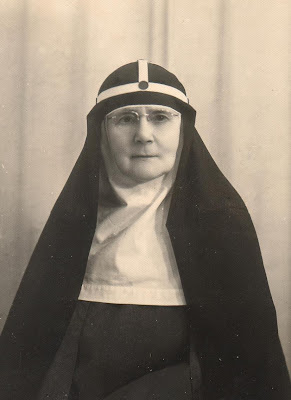 The Catholic Herald has more on Mother Mary Richard including some recollections by the present Vicar General of the Bridgettines. She was received into the Church at the age of four, here, at St Mary Magdalen's
Pray for her cause for Beatification to move swiftly to a successful conclusion.

Pope Pius was severely criticised after his death for not speaking out directly against the Holocaust, but he was convinced this would have backfired both against the Jews and the Church. However, his policy of opening up the churches to those fleeing persecution enabled an estimated 85 per cent of Roman Jews escaped the Nazis.

In 2004 Blessed Mary Elizabeth was recognised by Yad Vashem as one of the Righteous Among the Nations for her work in helping Jews. She died in 1957 and Mother Riccarda succeeded her as abbess until her own death on June 26 1966 at the age of 79. The pair are buried in the same grave in the convent church where they hid people from persecution.

Elisa Famiglietti, the vicar general of the Bridgettines' order in Rome, said the formal opening of the Cause would be "such a great honour for England".

She said: "Mother Riccarda was a wonderful woman. I knew her well and met her in 1954 and was with her up until her death in 1966.

"She was an angel who did so much to help our Jewish brothers during the war and I know they want to honour her as well. There are about a dozen or so sisters here in the convent in Rome who remember her and we are all very excited at the fact she is being considered for sainthood.

"Mother Riccarda was full of the spirit of God and was a very humble woman, she sang beautifully from the heart and she was devoted to God and she left a mark on all of us.

"Mother Riccarda was humble and discreet and she provided safety and charity for our Jewish brothers during the war but she very rarely spoke about it.

"What I always remember about her is that despite living for so long in Italy she never forgot she was English and always spoke English to us."

Once the nuns have established that Mother Riccarda lived a life of heroic virtue the file on her life will be passed over to the Vatican.

Two miracles are then needed before she can be made a saint - the first for her beatification when she will be declared Blessed and the second for her ultimate canonisation. A file is also being prepared on the cause for sainthood of Katherine Flanagan, a Londoner who joined the Bridgettines a year before Riccarda.

Fr Ray Blake, the parish priest of St Mary Magdalen Church in Brighton, where Riccarda was baptised, said he was "terribly excited" a bit of an understatement at the prospect of having a saint associated with his church.

I am pleased the Jewish Chronicle picked up the story too.
at February 13, 2009

:-D Perhaps if we all pray to her, she might prevail upon the Almighty to do something for you so that you can throw away that cane you use every so often. Don't know if it would be enough to count as a miracle, but, what the hey, I think she must be smiling on you for sure.

I have no doubt Mother Maria Riccarda will bring great blessings to the parish of St. Mary Magdalene, Brighton.