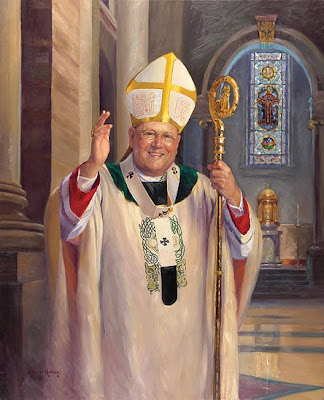 People say that the Pope's intention was to appoint mainstream men as Archbishops to three influential Sees Munich, Westminster and New York. Well the rumour mills are suggesting New York is to be announced shortly. Munich has already been apointed, I am not quite sure why Westminster is seen as so important but...

Il Riformista, mentions today, that Archbishop Timothy Dolan is about to be named as Archbishop of New York. He is presently Archbishop of Milwaukee. He replacing the notorious Rembert Weakland, who retired after admitting to having had a sexual relationship. In 2003, after a group of Milwaukee priests petitioned to make clerical celibacy optional, the Archbishop expressed his belief in celibacy "not just because I'm 'supposed to,' or reluctantly 'have to,' but because I want to."

He further defended celibacy against its critics, saying, "The recent sad scandal of clerical sexual abuse of minors, as the professionals have documented, has nothing to do with our celibate commitment."

In the 2008 presidential election, Dolan rebuked Democratic vice-presidential candidate Sen. Joe Biden and Speaker of the House Nancy Pelosi for "misrepresenting timeless Church doctrine" on abortion, which the Archbishop called the "premier civil rights issue of our day."

It makes one wonder what has happened to the Westminster succession, I can't help thinking that it is unlikely to be one of the present Archbishops, partly because of the time it seems to be taking. This would suggest that investigations into the candidates are taking place, Rome doesn't like skeletons tumbling out of closets, enough fingers were burnt with Archbishop of Warsaw's appointment and resignation. Files on Metropolitans are readily to hand and reasonably extensive, so their transfer is relatively easy, so maybe Archbishop Murphy O'Connor's successor is diocesan bishop, or a simply priest, or maybe an abbot.
That said, the last time Westminster was vacant it took 18 months to find a successor. Sorry, I have been corrected by those making comments, it was only 8 months!
at February 13, 2009

... so maybe Archbishop Murphy O'Connor's successor is a diocesan bishop, or simply a priest...???

Hmmmm... I bet that a simple blogosphere 'poll' would quickly come up with the names of two Priestly front runners for the title of 'successor to Westminster'! Please Papa Benedict look at England, Mary's Dowry, and send us a 'Thunderbolt' to sweep aside the 'cobwebs and dust' of 'lukewarmness' that has settled deep and suffocated the Faith of this Country that was once a beacon of Catholic light to the whole world.

May God Bless New York's new Archbishop and give him the Grace, strength and fortitude in the years ahead as the 'Culture of Death' continues to grow seemingly unabated in that beautiful Country called the United States of America.

The Tablet seems to agree with you.

You have made some very interesting observations in this post, but it certainly didn't take 18 months to find a successor for Westminster last time. Cardinal Basil Hume died in June 1999 and Bishop Cormac was chosen in February 2000 and 'installed' in March of that year. I should know, because I was involved in the liturgies on both occasions! 8 months would be more accurate. Going further back, Cardinal Heenan died in November 1975, and Abbot Basil was chosen in February 1976 and ordained bishop and installed in March 1976 - a gap of only around 3 months.

I believe that +Murphy-O'Connor, the former bishop of Arundel and Brighton, was the eldest of all the potential candidates last time, and I am convinced that that was a very significant factor behind his appointment.

It seems clear that a stop-gap appointment isn't being sought for this time, but one which will be based on far more solid foundations. Be patient and pray hard.

Rome is loking for a proven administrator who can successfully handle the media, and who will not be overwhelmed by the "high profile" office of Archbishop of Westminster. In other words, a "safe pair of hands".

A man of prayer ? Well, yes, of course. But Rome is under no illusions about England & Wales.

I do not expect a "surprise" appointment.

Of course, I could be wrong ..

Peter, I think in today's climate you are quite correct in saying that one of the criteria for selection as bishop is
'ability to successfully handle the media.'

I also hope that those in Rome who are going through the short list have, for themselves, checked out the candidates' orthodoxy and are not just depending on the nuncio or the bishops' commission recommendations. In the day of the internet this is not difficult to do.

I would strongly recommend Archbishop Dolan's book Called To Be Holy if one is wanting some spiritual reading.
'Here is how to be a good steward of the Gifts of the Holy Spirit as you hear and answer God's call.'

Owl, no you are not bland, you are mainstream.

"ability to successfully handle the media" - you mean he's going to choose a blogger?

"That said, the last time Westminster was vacant it took 18 months to find a successor. Sorry, I have been corrected by those making comments, it was only 8 months!"

I don't care how long it takes, as long as they do it right. Please God, let us have a man who is holy, strong in body as well as mind, and faithful to the teachings of the church.

He should be someone who can restore England to it's rightful place, and as a dowry that is actually worth something!

I live in Milwaukee. Dolan IS mainstream. In action, yes, it translates to bland. In person, he's awesome. Note that I think the title of this post is misleading until such an announcement is indeed officially made.