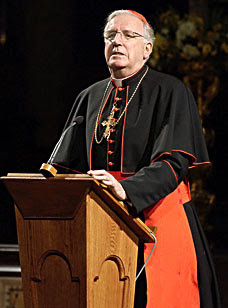 Ruth Gledhill has a positively gushing piece about a valedictory lectue by the Cardinal, see next post, she also says that Ms Pepinster has a interview with the Prime Minster after his visit to Rome, I wonder who wants to raise the Pills liberal profile?
Ruth heads her article "Cardinal 'could become Peer", it would be a great honour for His Eminence, a I am sure the Prime Minister would want him in the House of Lords, like former Chief Rabbis, or Moderators of the Methodist General Assembly or even Archbishops of Canterbury. Apart from it being pretty disastrous for his successor, who would speak for the Church in England, the new Archbishop or Archbishop Emeritus? Who would the media interview? Who would the Tablet laud or attack. As we have seen British bishops can be pretty eccentric when they speak on issues not directly connected to the faith. We Catholics have always understood being a legislator was not the function of a priest but of a competent layperson.
at February 26, 2009

The House of Lords is undoubtedly an attractive repository of warmth and conviviality for a retiree. It must be a difficult transition to go from being top man to ordinary Joe, but I hope the Cardinal would follow the example of Winston Churchill and John Major and resist the siren call of secular aggrandisement. Otherwise there is a danger of his becoming the spectre at the feast, a figure he most certainly would not want to be.
There must be plenty of scope for a man of his energies to continue his service within the Catholic Church, albeit in a rather different way.

How would he be styled? H.E. Cardinal Cormac Baron Murphy-O'Connor?

An interesting idea for him to be a member of the 'Lord's Spiritual' but would that be allowed I wonder and if H.E. did go the Upper House would he have to be a 'Lord Temporal'?

Would the Cardinal require dispensation from Canon 285.3 (which forbids clerics to assume public office whenever it means sharing in the exercise of civil power)? Maybe by the application of canon 87.1. If so, who would do the dispensing of a Cardinal?

The Cardinal would need the Pope's permission, wouldn't he? Canon 285 §3 says "Clerics are forbidden to assume public offices which entail a participation in the exercise of civil power." That includes being a legislator, surely?

"We catholics have always understood ..." Yes. More than that, I thought clerics were forbidden from taking seats in legislatures. Is that so?

Ruth Geldhill also imagines there to be "Moderators of the Methodist General Assembly". There is no such body, never mind any such office. This woman is the Religion Correspondent of The Times.

As to whom the media would then interview, Lord Murphy-O'Connor or his successor, we need not worry. George Carey is a Life Peer. So was Robert Runcie. So was Donald Coggan. So was Michael Ramsey. And so was Geoffrey Fisher, one of the earliest. The problem simply does not arise.

Rather, we should be asking, if some dispensation is available to enable a Catholic bishop or priest to sit once more in the House of Lords (where they once predominated), then why it should go to Cardinal Murphy-O'Connor. Surely someone more in tune with the Magisterium would be more suitable?

Following Gordon Brown's rather successful meeting with the Holy Father, the Vatican should bypass the "golden circle that we cannot break" (as the then Cardinal Ratzinger once called Episcopal appointments in this country) and ensure that at least one of the men who should be our bishops is instead among our Peers.

When one looks at the members of the House of Lords one wonders whether the Cardinal might be well advised to keep out. They have more to gain by his membership than he has by joining them.

We Catholics have always understood being a legislator was not the function of a priest but of a competent layperson - well said Father.

Cardinal Murphy O'Connor's heraldic motto is 'Gaudium et Spes'. Given this manifest devotion to the Vatican Council, we we shouldn't expect him accept a peerage should we?