Ark of the Covenant to go into a museum 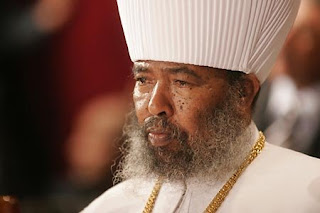 This link was sent to my by a Coptic Orthodox friend, with a note saying, "typical of those Ethiopians, that which God veiled with the cherubim and smoke they want to display to the gaze of mortals in IN A MUSEUM!!!!"
I have a certain sympathy I hate seeing saced objects in museums.
This may or may not be "the" Ark, but it is vernerated as such by countless Orthodox it is kept out of view in an Ethiopian church, touched and viewed only by bishops. Other Ethiopian churches have their own "icon" of the Ark which is treat with great veneration.

The patriarch of the Orthodox Church of Ethiopia says he will announce to the world Friday the unveiling of the Ark of the Covenant, perhaps the world's most prized archaeological and spiritual artifact, which he says has been hidden away in a church in his country for millennia, according to the Italian news agency Adnkronos.

Abuna Pauolos, in Italy for a meeting with Pope Benedict XVI this week, told the news agency, "Soon the world will be able to admire the Ark of the Covenant described in the Bible as the container of the tablets of the law that God delivered to Moses and the center of searches and studies for centuries."

The announcement is expected to be made at 2 p.m. Italian time from the Hotel Aldrovandi in Rome. Pauolos will reportedly be accompanied by Prince Aklile Berhan Makonnen Haile Sellassie and Duke Amedeo D'Acosta.

"The Ark of the Covenant is in Ethiopia for many centuries," said Pauolos. "As a patriarch I have seen it with my own eyes and only few highly qualified persons could do the same, until now."

You will find in the records, not only that Jeremiah the prophet ordered the deportees to take some of the aforementioned fire with them, but also that the prophet, in giving them the law, admonished them not to forget the commandments of the Lord or be led astray in their thoughts, when seeing the gold and silver idols and their ornaments.

With other similar words he urged them not to let the law depart from their hearts. The same document also tells how the prophet, following a divine revelation, ordered that the tent and the ark should accompany him and how he went off to the mountain which Moses climbed to see God's inheritance.

When Jeremiah arrived there, he found a room in a cave in which he put the tent, the ark, and the altar of incense; then he blocked up the entrance. Some of those who followed him came up intending to mark the path, but they could not find it.

When Jeremiah heard of this, he reproved them: "The place is to remain unknown until God gathers his people together again and shows them mercy."

Who cares about a fake ‘Ark of the Covenant.’ Stephan Huller has an academic article coming up which proves that this:


is the original Episcopal throne of Alexandria, mentioned in the Acts of Peter the Patriarch, Origen, Clement and other sources and dated to the first century.

I read the book. I loved it but I want to know what everyone else thinks? I think its very important but I am not an expert.

I found his blog with additional information:

Maybe you can tell me if this for real.

Michael - is this another one of your dispensationalist posts again? The Catholic church is the New Israel and we live under the new covenant of the Jesus Christ. The new ark of that covenant is Our Lady and she has certainly been revealed to the world.

Apparently it was a mistranslation of an Italian headline, or something along those lines. It did seem a bit odd they would go sticking it in a museum. (I read the "it's all a mistake" story somewhere on a blog or three earlier today, oh - here. I haven't looked up his references, though.)

I am not a dispensationalist, Hestor! Read my post again and you'll find I was quoting from the second book of Maccabees, which is canonical Scripture.

As a Monk-Priest of the Ethiopian Orthodox Tewahedo Church I was very surprised at the announcement. I’m glad to see the “correction” as Abuna Paulos action, if carried out as described in the article, would have violated the entire Ethiopian tradition regard access to the Ark. Also, one needs to remember that Abuna Paulos is just the President of the Synod of Bishops under the title of Patriarch. Such authority to move the Ark from the St. Mariam Cathedral (old) would have had to be approved by the Synod which met recently in late May, early June. To my knowledge, there was no such action; that would be real news in Ethiopia.

Have you seen that it is your turn today to be on Gloria TV news?

I shall always remember in the Museum of the Cathedral in Palma seeing Jewish devotional objects which had begun their life in a synagogue. The guide became somewhat restive under questioning from me as to how they had got there.

Perhaps more surprising was the presence of a Monstrance, which presumably should have been in use in the church.