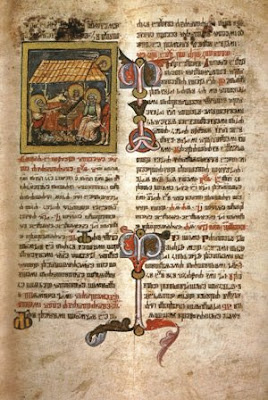 Why is it
Muslims use Classical Arabic (even in Indonesia or Pakistan)?
Hindus use Sanskrit?
Jews use Hebrew?
Greek Orthodox use Courtly Byzantine Greek?
Russian Orthodox use Church Slavonic?
Assyrian Catholics use Aramaic?

Even the dear of C of E for over four hundred years used a archaicised form of English. There is something about religion and the use of a sacral language. The Latin used in the liturgy was never a vernacular. It seems that the Church's great missionary inroads took place when the liturgy was it ina strange language. I am touched by Saints Patrick, Boniface, even the greatest missioner of all Francis Xavier landing on a foreign strand and celebrating the liturgy in Latin!
Fr Z does a Zeeee on an article America about making English the official language of the Church, now that should really please all those Spanish and Portuguese speaking South Americans, not to mention those people in the Middle East.
In 19th century Wales the Catholicism made inroads precisely because it didn't use English. In so many parts of the world language is really divisive, Spanish is unwelcome in Catalonia, French unwelcome in Flemish speaking areas. The shame of nationalism in Rwanda divided the Church into murdering partisan language factions. Language is really divisive in so many of the large Indian cities were Christian immigrants are divided by four five different languages. Even in the US in some parishes there is a divide between Spanish and English speaking congregations.
I was a little shocked when some of my parishioners went to Rome and didn't go to Mass because the couldn't find an English Mass, but on reflection so many of my Portugese, Italian, Spanish, Slavakian parishioners don't go to Mass because we are unable to offer Mass in their vernaculars. If I am attending Mass abroad, I have to admit, I search out Mass in English or Latin. Really I prefer the old Rite because it is much less verbal than the Usus Recentior.
at June 10, 2009

I'm not disagreeing with your take on language and the Liturgy but wonder where you thing Cyril and Methodius 'sit' within this debate....with their introduction of vernacular liturgy?

So having mass in the vernacular is a cause of mortal sin then, and divides what is meant to be one rite into many, many national rites in reality also dividing the Church along national lines obscuring the universal nature of the Church and making it more difficult to fulfil our Lords command to be all one.

In short the vernacular has been a disaster as far as the mission of the Church is concerned, but it sure did make liturgical experimentation easier and more widely available.

The Western Church is very large, and having the Vernacular has caused major divisions within the Church. It's made Liturgical Abuse much easier and as VL mentioned experimenation much easier.

When I do go abroad, I will be looking for UA Masses or Latin, Though if it's in another language I'll just reply in Latin.

I'm convinced, after years of retailing the various arguments in support of Latin myself that most of them are completely bogus - retrospective rationalisations for the worst kind of "religious" conservatism. I "like" Latin; I "like" Koine Greek (at the suggestion of my PP I am preparing for the diaconate, and thus having to learn to sing great chunks of it) I "like" Slavonic - but my Copernican revolution on the point is as a consequence of having experienced (not often enough) REAL liturgy in REAL, sacral (i.e. NOT "vernacular") English.

Of course the services and the scriptures should be in the languages, in their highest literary "register", of the gentes. The real tragedy is that the comprehensively botched reform of the Roman rite has trashed any possibility of this happening in the forseeable future - just as the movement within Russian Orthodoxy to introduce modern Russian, proposed by St Tikhon among others on the eve of the Revolution, is probably permanently off-limits now as a consequence of association with the Bolshevik "Living Church". Paradoxically, outside Russia the Russian Church has a fine history of developing and promoting the scriptures and the services in the language of local peoples. St Innocent of Alaska himself (following the Example of SS Cyril and Methodius) famously translated liturgical rites and scripture into over twenty separate Aleutian dialects. Here in England, Orthodox of the Russian tradition have pioneered the adoption of English translations of breathtaking beauty and fidelity.

Why on earth should the practice of Jews and Moslems have any bearing (other than an entirely negative one!) on that of the Church? Is Christianity merely a "religion" after all, sharing with "other religions" a common cultic mentality?

What this confirms is merely that the Roman liturgy has been debased to the point that it is often, now, mostly just "talk".

If I am attending Mass abroad, I have to admit, I search out Mass in English or Latin. Really I prefer the old Rite because it is much less verbal than the Usus Recentior.

PS: Our Slovakian (and Russian and Bulgarian and Romanian and Scottish) parishioners are there every week, despite not understanding Koine Greek.

But don't forget that Greek was originally the language of the Church -- and then Latin took over because more people understood latin than Greek. Given the educated learned latin, it was the natural lingua franca for centuries. [Who "cared" if an ignorant peasant, who couldn't read anyway, knew what the priest was saying SILENTLY during a good part of the mass?] The educated knew latin and that's who was catered to as time went on...but INITIALLY "the powers that be" cared that people were watching and participating in more than a dumb show. I like the Latin Mass, but it takes some work. Most people are lazy and aren't going to do the work. Pity. But there you are. Human nature.

As far as English, in many places it is a common language used because it is percieved as neutal. In many parts of Africa and on the sub-continent of India, for instance. [French serves a similar purpose.] The case fo English is good simply because it is widely studied world-wide.

As for skipping Mass because it's in a language you don't understasnd: Inexcuseable. You should at least if you've been paying a jot of attention have a clue what's going on -- though you may not get the changeable parts of the Mass.

In 1549 the Cornish rebels objected to the new liturgy in English because to them it was foreign. Certainly they did not understand Latin either- as Cranmer was quick to point out, but they were used to it. The Anglican BCP has a service which contains the following petition -"Cursed be he that moveth his neighbour's landmark". One wishes that his had more often been heeded by clerics of all persuasions.

From time to time I travel to Uppsala on business. Nice place, Uppsala. So far as I can tell there is just one catholic church there, conveniently located in the city centre. Several priests and a community of nuns attached. One of the priests is chaplain to Uppsala University. Mass is celebrated in Swedish, English, German, Polish and Spanish. But there's somthing missing ...

Surely this makes a good case for

(a) encouraging all Catholics to become sufficiantly familiar with the Latin Mass (either OF or EF, preferably both) to comfortably follow Mass in the universal liturgical language, and

(b) seeing that one Mass (at least)is celebrated in Latin (at a sensible hour) on Sundays, Holy Days and principal feasts (and where possible, weekdays as well), in every parish.

This would effectively mean that everyone would have the option of attending a Mass with which they were familiar anywhere in the world. In most parishes, this would still allow the option of having the majority of Masses in the vernacular, if the priest so choose.

(I would personally be quite content if all Masses were in Latin, and preferably Usus Antiquior...but then I am somewhat traditionalist...)

Let's be honest: the manifesto of the Cornish rebels, brave and devout as they may have been, is not, unfortunately, very edifying.

1. Why is Moretben always so insulting about the Catholic Church?
2. Why do allow his comments, Father?

"Cursed be he that moveth his neighbour's landmark".

Well that would sure explain the last 40 years.

Language is highly political. It defines power relationships, both between and within languages. Which is why the potential for division through the use of the vernacular is so great. This is all too evident in mixed-language areas and where lingustic useage corresponds with social and economic class divisions.

There is also the issue of musical settings. The tradition of 3000+ years adapts badly to some languages eg you can't do Gregorian chant in English without awkward adaptations.

There is far more migration and travel than when the vernacular liturgy is introduced. It has outlived whatever usefulness it may have had.

To see the full absurdity of the use of vernacular it is instructive to visit Sweden, which has a thriving Catholic Church, probably despite rather than because of the use of vernacular. There is a good translation into the vernacular and the adaptations of the chant were done in the seventeenth century for the national church and being ready-made for our use, there was no difficulty in incorporating them into the liturgy. The problem is that so many of the priests and congregation are foreign and not all that familiar with the vernacular. What then?

Incidentally, the official instruction only said "may be said in the vernacular", thereby implying that the use of the vernacular was never intended to be normative but merely concessionary.

I aim to be constructively critical, rather than "insulting".

Many people in the 16th century were brave and devout while not always being edifying. Some of the scatological invective employed by St Thomas More would not now be printed in a family newspaper. Moretben should judge the Cornish rebels against their background.

Amusingly enough, the English translations of "breathtaking beauty and fidelity" to which Moretben refers are often based on Cranmer's 1549 Book to which the Cornish rebels rightly objected. Their Latin Mass was replaced by what at times looked like a Christmas game - Sir Roger. Even English of surpassing beauty could not make up for that.

...which only confirms my point - a new rite with a calculated theological/ideological squint was imposed, but what attracted the opprobrium, then as now, was the issue of language - thus damning by association something in itself entirely good, wholesome and reasonable.

I wouldn't dream of judging the Cornish rebels. I mentioned their manifesto, which demands together with the restoration of Latin that heretics should once again "die like dogs". I trust you aren't suggesting that the Christmas game they rightly despised resembled in any respect the Orthodox Divine Liturgy? Of course you aren't. That's my point.

"you can't do Gregorian chant in English without awkward adaptations"

The Cistercians of Sancta Maria Abbey, Nunraw manage it quite well in the Divine Office.