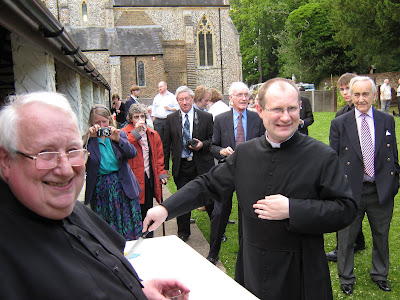 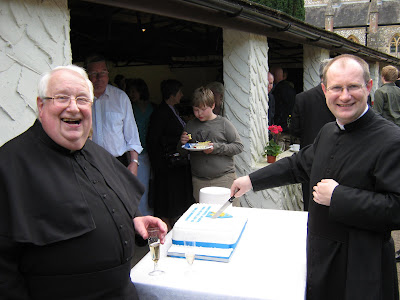 I went to the Shrine of Our Lady of West Grinstead yesterday for a first Mass of Fr Matthew Goddard FSSP. Fr Matthew is the son of Fr David Goddard, who had been an Anglican clergyman. Matthew was received into the Catholic Church in his teens, and was subsequently followed by the rest of his family including his father, who was ordained to the priesthood in 1997.
The music was wonderful, I think it was Lassus, it was sung by a choir from Harrow, "Schola Baptista", from the Conventual Church of theSovereign Miltary Order of Malta in St John's Wood, directed by Eoghan Murphy. Victoria Missa Gaudeamus; Victoria Salve Regina à 8; Guerrero SurgePropera. and Panis Angelicus was sung by a sister of the newly-ordained. Wonderful!
The Church was packed, there were lots of young children, most from the local area. The preacher was the priests dad. I was touched by the devotion of the elderly people in the congregation who struggled to kneel to receive Holy Communion on the step without any support.
I like the idea of Fr Matthew coming and working in the diocese, maybe even taking over from his dad at West Grinstead but being a member of the Fraternity of St Peter, which celebrtates the Traditional Mass exclusively, he could be sent anywhere in the world. 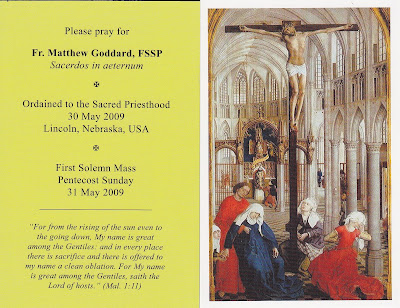 Fr Matthew's ordination card
What do you call the priest father of a priest, is it "Grand Father"?
at June 22, 2009

I'm sorry, we in Ottawa have the absolute pleasure of Fr. Goddard's ministry - and I like it that way!

The parish misses you Father and we all look forward to our first blessings.

That's where I was Confirmed in 1950 and had the privilege of being in the Choir.

I attended Fr. Goddard's first Solemn Mass the day after his ordination here in Nebraska--beautiful!

:-D Years ago when I was a girl living in Virginia, the diocesan paper carried a delightful photo of two nuns. Mother and daughter. Daughter was the "mother" of the order, and her mother joined the order after her husband (the girl's father) had died. The daughter was standing behind the seated mother, and the caption read "Stand behind your mother, Mother."

I was there Fr Ray with hubbie and 6 of the local children you mention were ours! I didn't spot you, I have to admit that. Are the photos of you on your blog a good likeness??
By the way, it was the first EF Mass that I and the children had been to, though no so for my husband (we are from a neighbouring parish). We really enjoyed the Mass & were especiallt touched by the friendliness and warmth of everyone at the reception in the garden, which followed. We knelt as a family and received a blessing from Fr Matthew at the garden gate as we left, along with many others. Thank you God.

Surely you would you call the priest father of a priest, "Sacerdos Magnus"!

Wow what a fascinating and inspiring story. That is wonderful that you were there at Fr. Goddard's first Mass. I love seeing the pictures you posted on your site of the two Fathers. My family visits a Fraternity Parish from time to time.

Of special interest relating to your post, I would like to lead your readers to this website. They have created a year for priests support community where people are encouraged to offer Rosaries for priests. Fr. Matthew Goddard is listed there for people to pray for along with other recently ordained priests. Maybe some of your readers will commit to praying Rosaries for him.

Thank you and God bless.