Pelican in her Piety 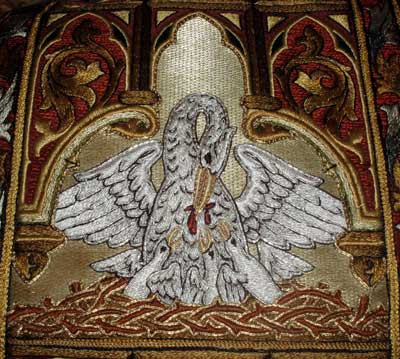 The Medieval Bestiaries speak of the mother Pelican feeding her chicks with blood from her breast.
It is became a popular image of Christ feeding the faithful in the Holy Eucharist. the same ideas lie behind piety that developed in the devotion to the Sacred Heart.
In our Sacred Heart chapel there is a window in which the Sacred Heart is depicted, blood pours to the bottom of the window and is caught in the window below in a chalice.
I have never been able to photograph it as someone 120 years ago built my house about six foot behind, so it never gets light shining through it as the designer intended.
at June 19, 2009

Re: your window, is it possible to have an artificial light lowered between your house and the window in question? Not perfect, but might be interesting to try?

Is this about where the problem window is?

I know someone (and so do you!) who is rather good with rigging, and electricity. Heck you may be able to drop him from his heels upsidedown holding a light, while you run around to take a picture. He's not likely to get electrocuted either.

And surely, in all of Brighton, there must be someone from the theatrical community who could loan a frenel!