A Visit to Athos 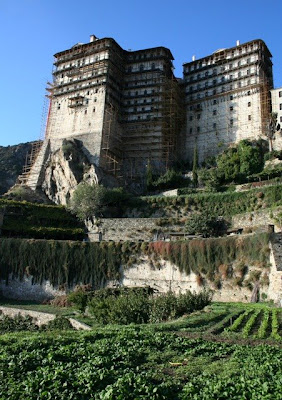 There is a reprint of an old article about a a visit to Athos on Chiesa, it is a nice vivid piece of travel writing. I thought this little extract, an eastern view of western liturgy, was provocative.

What Western, Catholic liturgies today are able to initiate simple hearts into similar mysteries and to inflame them with heavenly thoughts? Joseph Ratzinger, previously as cardinal and now as pope, hits the mark when he points to the vulgarization of the liturgy as the critical point for today's Catholicism. On Athos the diagnosis is even more radical: the Western churches, in trying to humanize God, make him disappear. "Our God is not the God of Western scholasticism," the igoumenos of the Gregoríos monastery on Athos moralizes. "A God who doesn't deify man can't have any appeal, whether he exists or not. A large part of the reasons behind the wave of atheism in the West are found in this functional, incidental Christianity."

Vassilios, igoumenos of Ivíron, another of the monasteries, echoes the sentiment: "In the West, action rules; they ask us how we can stay here for so many hours in church without doing anything. I reply: What does the embryo in the maternal womb do? Nothing, but since it is in its mother's womb it develops and grows. So it is with the monk. He preserves the holy space in which he finds himself and he is preserved, molded by this same space. The miracle is here: We are entering into paradise, here and now. We are in the heart of the communion of saints."

Being passive in a sacred space is what the EF liturgy is all about, surely?

What a beautiful analogy between the holy space of the monk and the child growing in his mother's womb.

There is what is described as an exceptional exhibition of icons from Mount Athos on at the moment in Paris at the Petit Palais. The website leads through to an amazing 'Zoomorama' of icons where the viewer can zoom in close up to the details. They are really magnificent.

Could you please give a little bit of a clear, objective commentary on that first paragraph, Father? I think I understand it, but I want to hear your take on it. The second paragraph is beautiful.

USLS,
I think if make worship of God horizantal it quickly becomes worship of community, and God then becomes unnecessary,
I finfd Byzantine criticism of modern western liturgy provocative. I need to get my head around it properly.

'Western churches, in trying to humanize God, make him disappear'
We have now set up another god to worship, a god of materialism and atheism.
We have handed over silence, a time to listen and speak to God, for perpetual noise, whether it be an ipod, MP3 player, radio, TV etc, background noise has become oppresive.

Satan makes sure we have no time for God by keeping us chasing our tails and we just accept it as the norm. The constant noise does not allow us a moments peace.

Fr. Gabriele Amorth writes how Satan uses music to destroy souls especially the young. He mentions WICCA (an organization of witches and others to the occult) which own 3 record companies. And their goal is contributing to the corruption and inner disintegration of the psychology of young people.

Dear Father in Heaven teach us to love silence and teach our young to understand its priceless value.

I find Byzantine criticism of modern western liturgy provocative. I need to get my head around it properly.

Fr Alexander Schmemann - For the Life of the World. Schmemann also identifies the alienated categories of Scholastic theology as fatal to an authentic liturgical life.