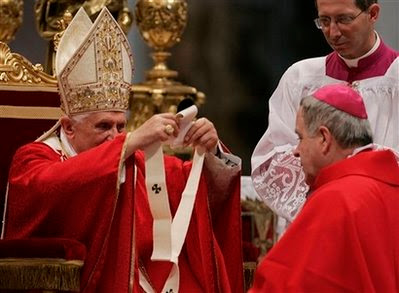 Bishops are called to watch over their faithful not like "a prison guard," but with the same love and concern that God watches over the world, Pope Benedict XVI said.

"To watch from God's perspective is to watch with that love that wants to serve the other, to help the other truly become him- or herself," the pope said June 29 during his homily on the feast of Sts. Peter and Paul.

During the Mass in St. Peter's Basilica, 34 archbishops from 20 countries knelt before Pope Benedict and received a pallium, a woolen band worn around their shoulders as a sign of their authority and their responsibility as shepherds.

In his homily, Pope Benedict said the First Letter of St. Peter describes Jesus as "the bishop of souls."

"This means that he sees us from God's perspective. Watching from God's point of view, he has a vision of the whole and he sees dangers as well as hopes and possibilities," the pope said.

Those appointed to serve the church as bishops must model their ministry on that of Christ, working to ensure that everyone comes to know God and to be part of the community of faith, he said.

Watching over the faithful, the pope said, "certainly does not mean surveillance as is fitting for a prison guard. Rather it means seeing from on high, from the heights of God."

The words "bishop" and "shepherd" are almost interchangeable, he said.

"To shepherd the flock means to be careful that the sheep find the right nourishment," which for Christians is the word of God, he said. Shepherds also "must know how to resist enemies, the wolves. He must lead, indicating the path and preserving the unity of the flock," the pope added.

Bishops also have a responsibility to help people see the Christian faith not "simply as a tradition, but to recognize it as the answer to our questions," he said.

But to discover the relevance of faith for everyday life, the pope said, it is not enough just to think things through or to hear explanations.

"We need the experience of faith, a living relationship with Jesus Christ. Faith must not remain a theory; it must be lived," he said.

Pope Benedict said the beginning of St. Peter's letter cites the goal of Christianity as the "salvation of souls," a term the pope said is seldom used today and one that sounds strange to modern ears.

The terminology makes some people think Christians are dividing the human person into separate components of body and soul, while others think it focuses so much on the individual that it loses sight of the responsibility to protect and save the whole world.

"But this has nothing to do with the Letter of St. Peter. His zeal for witnessing hope and responsibility for others characterizes the entire text," he said.

"Without the healing of souls, without healing people from the inside, humanity cannot be saved," the pope said.

Pope Benedict told the archbishops that, like Jesus, they are called to carry the lost sheep around their shoulders and bring them back to safety. The lost sheep are not just members of the Catholic Church who may have lost their way, but are all of humanity, he said.
Catholic News Service
at June 30, 2009