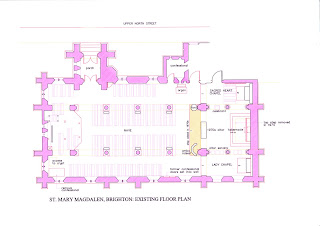 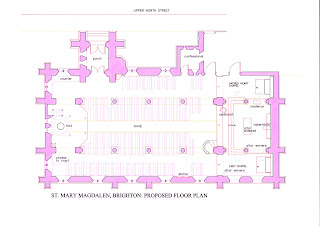 Today we had a site meeting with a couple of members of the Historic Churches Committee in preparation for a presentation to the whole Committee next month. On Friday we wrote formally asking permission to spend £100,000 on the first phase of our restoration project. We have half of the money, through scrimping and saving over the last five years. Small inner city parishes never have much money. my predecessors sold off any assets we had to prevent the place falling down. Though a few of our parishioners are very generous, many are students, immigrants, unemployed, permanently sick so the majority give less than £1 a week. So I hope that we will be able to repay the diocese within the next five years and begin Phase 2.
The Phase One concerns Health and Safety issues stripping off the linoleum, which is fast becoming a trip hazard and sealing the floor, adjusting the floor levels raising the altar and moving it back, we can't put it back against the wall but we can give it a sense of belonging to the reredos. We also want to move the font to the back of the Church, and the organ console to the organ gallery.
The other part of Phase One is the lighting, in the seventies the system was condemned and replaced by a temporary one, now the temporary system has more or less come to the end of its useful life, we used to be able change bulbs with ladders but this is now illegal so we really have to hire a scaffolding tower everytime a bulb blows as a large are of Church gets plunged into darkness.
We would have liked to put in underfloor heating but we wont be able to afford it.
Phase Two will concern the structure of the church, most of that is getting the hideous grey paint off of the stone and plasterwork, unfortunately it seals moisture into the fabric of the build which causes sructural damage.
Phase Three will be moving carvings to face the altar, restoring the pulpit, it was lowered by a foot or so in the seventies. Subsequently we will need to do work on the beautiful Hardman windows.
This is the present state of theinterior of the building
If anyone wants to donate, send a cheque to St Mary Magdalen Appeal, 55 Upper North Sreet, Brighton BN1 3FH, if you are a UK taxpayer it can be giftaided, unfortunately our diocesan basnking system isn't up to Paypal.
at June 29, 2009

This sounds very encouraging and will give the impression to outsiders and passers by that people care about their church and their religion.

I wish you every success.

I wonder if there is a way to "bring the lighting to Mohammed" so to speak. For instance in the theatre, you can have the lights lowered to the floor from a fly system. Now you can't put a fly system in the church BUT is there perhaps lighting with the press of a button, can be lowered to your level? I've always wondered about this. Yours isn't the only church with this problem.

[And well done on saving up half the money so far!]

Your plans for the reordering of the Sanctuary are very impressive and I particularly like the restoration of the traditional 3 steps up to the altar (which of course represent the 3 falls of Christ on the way to Calvary). One observation I would make is that it appears from the drawing that the new platform and steps are going to stretch almost the entire length and breadth of the Sanctuary which has implications for celebrations of the Extraordinary Form. At a High Mass not only would this place the servers on the same level as the celebrant and above the other Sacred Ministers, but it would leave no space behind the Deacon and Subdeacon in which to manoeuvre servers around as torchbearers or at the Gospel procession without spilling out into the Nave. Is it not possible to maintain the current width of the existing platform (with the restoration of the third step) and move it forward just enough to accommodate space behind the altar for versus populum and sufficient space in front for a footpace thus leaving enough space at the bottom of the steps for servers and Sacred Ministers to move around more freely? Given that your re-ordering looks towards a future where the OF and EF are intended to exist side by side this would prevent further adjustments being required in future. On the same subject of OF/EF complimentarity could the ambo be moved to the Gospel side thus enabling the sedilia to remain in the same place on the Epistle side for both forms of the Mass?

Please don't think I am being unduly critical but I have seen how cramped celebrations of the EF can be where the altar and steps are too close to the front of the Sanctuary.

I wish you every success with the project.

I tend to agree with 'Sussex Catholic' - why cannot the 1970's altar be moved closer to the reredos/tabernacle?

That would give a better visual connection and allow more in plano space before it.

Some encouraging proposals, which I'm sure will improve the church.

Any thought to re-instating the alter rails with the re-ordering of the sanctuary?

Regarding access for changing light bulbs, even the HSE will tell you that it is not illegal to use a ladder for such a task.
http://www.hse.gov.uk/press/2005/e05110.htm
For a task that is infrequent and of very short duration, where an alternative such as a scaffold tower is inappropriate, using a ladder SAFELY should be perfectly OK.
In carrying out a risk assessment, one can cite the actual number of injuries caused by falls from ladders while changing light bulbs in the church over the last 100 years, which is hopefully nil. Furthermore, one can take steps to mitigate the risk, by perhaps having a number of designated people trained in how to safely erect and work from a ladder, and offering a prayer to St Lucy (patron saint of electricians, I'm told) before changing any light bulbs.

Good, but the reredos will always look as if it has been bomb-damaged until it is reunited with the altar.

The lighting system is hideous but it would help to use long-life bulbs and change them all, say, once a year. They can be re-used in another location.

I have a feeling that in ten years time nobody will want to have the priest with his back to the crucifix and tabernacle, not least the priest himself.

Illegal to use a ladder to change a light bulb? Some bureaucrat has far too much time on his hands.

The HSE are just pawns of industry and these rules & regulations are only meant generate WEALTH the same as the GLOBAL WARMING nonsense.

They wonder why the Economic Growth of the country is the lowest for 500 years.

It all looks lovely, Father, but I'm not keen on the position of the sedile. Won't you look a bit like Ronnie Corbet telling stories on the Two Ronnies?