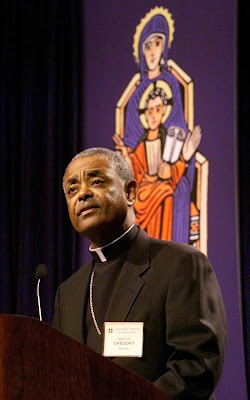 Immigration is obviously good for the Church in the US, newly ordained priests are frequently born abroad or are the sons of immigrants, in some southern diocese Spanish is as widely used as English,
I was struck by this account presented by Rocco Palmo of the diocese of Atlanta under Archbishop Wilton D. Gregory. Palmo doesn't mention immigration, he speaks of the cause of considerable growth as being orthodoxy, which for a one time Tabletista is significant.

In a recent list of the Stateside church's "hot spots," the archdiocese of Atlanta topped the bunch -- and not just alphabetically, either."The diocesan staff are openly disciples," the cite read, "orthodox, wonderfully creative and not driven by fear.
"Suffice it to say, the fruit is considerable -- in the heart of the Bible Belt, the North Georgia church has seen a more than fivefold increase in membership over the last two decades, exploding from 150,000 in 1990 to within striking distance of 800,000 today... and -- as if that wasn't enough -- a concurrent increase by half of the diocesan presbyterate (121 in 1990 to 181 today), with eight more priests ordained last weekend... and, what's more still, they can't build or expand the schools quickly enough.
Oh, and -- while we're at it -- over 2,700 adults were received into the local church there over the last year.If all keeps up -- and by the looks of it, the rate of the rise just keeps accelerating -- it won't be long before a red-bird comes home to Peachtree Street. In the meantime, though, earlier this month the Southeast's second-largest local church (after Miami) hosted another edition of what's become its marquee event: the Eucharistic Congress, which (again) grew by half this year to an estimated attendance of some 30,000 and, in its 14th year, has entered the rarified realm of Stateside Catholicism's largest gatherings alongside Los Angeles' Religious Education Congress (40,000 yearly) and the 100,000-plus who throng to suburban Chicago's Maryville Shrine every 12 December for the feast of Our Lady of Guadalupe.
In its last edition, the local Georgia Bulletin devoted the entire shebang to the weekend-long event -- its closing Eucharist presided over by the patron saint of the press -- so read up....Meanwhile, in an even more recent development, against his protests,
The Wilt has gone a-Twitter.

A red bird coming home to Peach Street? My goodness, whatever next?

What the heck...Scarlett O'Hara's family started a trend! ;-D