Don't be resigned to empty confessionals 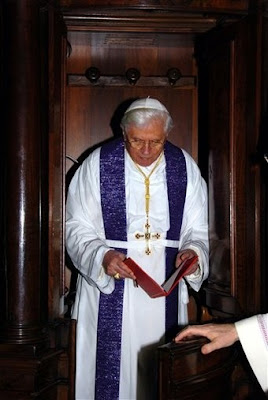 It is more than significant that the Holy Father having placed the Cure d'Ars at the centre of his letter to priests, then immediately visits the shrine of Padre Pio.
What these two saints hold in common is the long hours they both spent in the confessional.

Priests ought never to be resigned to empty confessionals or the apparent indifference of the faithful to this sacrament. In France, at the time of the Cure of Ars, confession was no more easy or frequent than in our own day, since the upheaval caused by the revolution had long inhibited the practice of religion."Yet he sought in every way, by his preaching and his powers of persuasion, to help his parishioners to rediscover the meaning and beauty of the Sacrament of Penance, presenting it as an inherent demand of the Eucharistic presence.
Pope Benedict's letter to priests

It strikes me that what is significant about these two saints not so much that they were obsessed with sin but with God's overflowing, all consuming mercy.
The Pope quotes the Cure as saying, "It is not the sinner who returns to God to beg his forgiveness, but God himself who runs after the sinner and makes him return to him."
There is crisis in the confessional, there is a confusion about what the role of the priest is in the confessional. Primarily, he is one who absolves. All the good confessors I have ever been to have all been rather short on there own words but able to communicate that God loves me.
When I go to confession I feel too vulnerable, too naked, too ashamed of my sins to take in a sermon. I want is to get it over as quickly as possible, I search out confessors who give out mercy freely, liberally.
The Father in the story of the Prodigal Son, is more concerned about getting the sandals, ring, and best robes on the returned son and having the fatted calf killed, than anything else. Indeed the formula that the Son has prepared on his journey home from the distant country is hardly heard, the substance of the confession, "Father I have sinned against Heaven and ...." which could never really sum up the son's sins is not really heard. The Cure d'Ars could have speaking about this when he said, "I will tell you my recipe: I give sinners a small penance and the rest I do in their place." We priests need to remember that we can bring about true repentance through our own prayer and penance rather than tedious admonitions.
Indeed, God has already done most of the work before the penitent has even got to the confessioonal.
The Council of Trent wisely tells us that we should confess sins according to "number [as far as possible] and species" there is a great wisdom in that formula, it makes penitents realise quite what is a sin and what is mere guilt, what is an offence against God which is what the confessional is about and what is often the psychological effect of that offence. Every priest can deal with sin and forgiveness and delivering God's mercy, dealing with someone's guilt is possibly a bit more specialised and is really in the realm of spiritual direction, often the two overlap, but the confessional and the Sacrament of Penance is primarily about forgiveness.
If we are to overcome the crisis of empty confessionals we need to address two things:
1 The tremendous offense sin is against God's infinite love.
2 The extraordinary desire God has to forgive.
The example the Pope draws from the life of the Cure d'Ars is that the priests personal prayer life and the purity of his love for God are essential for this.
at June 24, 2009

I have always struggled with the requirement to confess sins in number, since more often than not what my examen of conscience turns up seems to be more generalised matters rather than specific instances of sin. I wonder if I am concentrating too much on what you are calling guilt here? For instance, if I have been proud (my biggest problem!) there might be some specific instances of it, but more often I'm aware of just 'being' proud.

If you are able to give any pointers I would appreciate it a great deal!

Our bishop Philip Tartaglia sets great store by the Sacrament of Penance and frequently mans the confessional in churches of the Diocese of Paisley. Here is link to an interesting, informative and inspiring talk he gave on the value of the sacrament: http://www.paisleydiocese.org.uk/Talk%20070320%20COPs%20Dunkeld.htm

Trying looking at the way in which it manifests itself.
Has my nature led me to treat others with contempt etc...?
A feeling of being proud is not itself sinful, it is when we fail to control it that it becomes sinful.

"The seven deadly sins" so often are ways of identifying our nature rather than being specific sins in themselves, eg gluttons can be quite thin but never able to say no to themselves.
Naming sins is like naming demons, we have some control over them, if we can name them.

Our bishop, Philip Tartaglia sets great store by the Sacrament of Penance and frequently mans the confessional in churches of the Diocese of Paisley. Here is a link to an interesting, informative and inspiring talk he gave on the sacrament: http://www.paisleydiocese.org.uk/Talk%20070320%20COPs%20Dunkeld.htm

Beautifully said Father. I liked the line re: God running after the sinner.

And I guess it's nice to know that priests aren't always on the same side of the confessional!

I have an sarky inner voice that says "yeah, yeah, profound, waddever, now, what did you actually DO?" when I am doing an examination of conscience :-)

Don Reto Nay, of gloria.tv fame, used to say (probably still does) that it is very healthy to confess in a language you don't know very well, because you can't beat about the bush nor wrap yourself up in subtleties - you are stuck with "I stole, I lied, I was unkind in word, I committed adultery, I blackmailed, ..."

Father, this was a wonderful and very moving post. Thank you so much.

Father how does the pope's incentive square off with what your archbishop says about frequent confession?

I wish we had a confessional in our church - face to face it can feel like a chat or counselling. And I do wish that, where there is a confessional, the priest would close his newspaper and put it away during my confession so I could be sure he wasn't still reading it.

Thank you for that Father, I find the confessional such a relief. I don't know how people cope without it. Each priest is able to open our hearts to the mercy of Jesus Christ, and it is important to remember that we are confessing our sins directly to Him. The priest is there in Persona.
Perhaps if more people realised that Jesus was there in the confessional the numbers would increase. Better we tell Him our sins now and be corrected than wait till jugdement day.