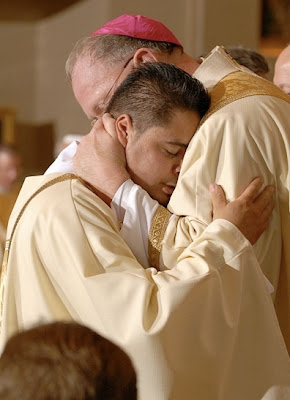 The thing that binds the Church together, and makes it rather messy too, isn't a military type command structure, it is actually simply affection.
Some of you who comment on this blog suggest the Pope, or bishops, or priests should "put the boot in" as often as possible, sometimes that is absolutely unavoidable, but that can't be the norm in any organisation or society, least of all in the Church of Jesus Christ.
I was touched by this photograph, which is uncaptioned, of Archbishop Dolan of New York, presumably a young priest (presumably) at his ordination. It sums up the father/son relationship of bishop and priest which lies at the heart of the Church.
Archbishop Dolan has a difficult task, whilst many had great affection for Cardinal Egan, his predecessor, their were often tensions on at least a couple of occasions these became public and splits in the diocese between bishop and priests sapped morale. Rocco Palmo reports on initiatives the Archbishop is taking to build up relationships between himself and priests.
If the Year for Priests is to bear fruit one aspect that is crucial, is bishops trying to build bonds of affection between themselves and their priests, especially in today's Church were priests can so often be left feeling overwhelmed by diocesan bureaucracy.
I have a friend from a northern diocese who was so delighted when his new bishop made time to sink the best part of a bottle of scotch with him and a few other priests one evening - hard on the liver but soft on the heart. Vatican II seems to see that a bishops main priority is his relationship with his priests, I am sure for many bishops this can be a crucifixion, but "strengthening the brethren", imitating Christ the High Priest who spent most of his time eating with and talking to his Apostles can't be a bad thing for the Church.
at June 25, 2009

Some of you who comment on this blog suggest the Pope, or bishops, or priests should "put the boot in" as often as possible, sometimes that is absolutely unavoidable, but that can't be the norm in any organisation or society, least of all in the Church of Jesus Christ.

I've never heard such rubbish in all my life. As a young father of two girls I can tell you the "the norm" for punishment is very simple: When she does something she shouldn't, she gets told off.
If she persists, we deal out punishment (usually a spell sat on her own with no toys).

The frequency of punishment is determined not by any lack of paternal affection on my part but by the frequency with which she does something wrong. To suggest that Bishops should turn a blind eye to priestly infractions because they have a "father/son" relationship is absurd.

James on the occassions I have dealt with young children I have found encouraging the good tends to work better than punishment.

I don't think I suggested "that Bishops should turn a blind eye to priestly infractions because they have a "father/son" relationship".

Sound teaching, personal example, fraternal dialogue, and if necessary fraternal correction tend to be better than the "naughty chair".

Too heavy a hand and you will drive your daughter away from you. St Paul warns parents of this!

My limited experience of the seminary selection process was interesting. I sensed that both Bishop and priests are now very ambiguous about the role of the male, celibate priesthood in the contemporary Church. Some of their public and private utterances are very much a case of turkeys voting for Christmas. The increased proliferation of "Eucharistic services" run by lay people is the latest manifestation of this ambiguity.

"James on the occasions I have dealt with young children I have found encouraging the good tends to work better than punishment."

I agree encouraging the good works better than punishment and I don't deny the importance of sound teaching, personal example and fraternal dialogue. These things are all essential because when my daughter is old enough to tell me to get lost, the only reason she will be good is if she has grown up to value being good herself.

My point is that there are times when punishment is required and that the frequency of those times depends on the behaviour of the child and *not* on the level of paternal affection.

You seem to be suggesting that the frequency of punishment should be kept low as a result of the paternal bond between a priest and his bishop. Those of us who would like to see Bishops "putting the boot in" more often feel that the frequency of punishment should be independent of whether a Bishop gets along well with his priest or not but should instead depend upon how often the priest does something he shouldn't.

James,
I am not suggesting that, what I am suggesting is that the bonds of communion are dependant on affection and love.

Where that appears to be lacking there is always the risk of defection or even schism in the case of bishops.

I have seen to many priests leave diocese and especially religious communities because they have been treated harshly.

Schism, I am told is something the Pope fears with the Austrian Church if he pushes too hard, that was part of the problem that led to the formation of the "Old Catholics".