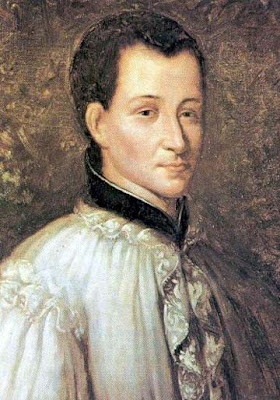 I was searching for something about devotion to the Sacred Heart at the Stuart court, Roman Christendom has this.

Thereafter the devotion was taken by her [St Margaret Mary Alacoque's] confessor and spiritual director, St Claude de la Colombiere SJ, to England where, as chaplain to the English Queen, Mary of Modena.

St Claude de la Colombiere SJ, confessor of both St Margaret Mary Alacoque and HRH Queen Mary of England, wife of King James II and VII. He was a great promoter of the Sacred Heart devotion.

In 1676 he had been sent to England as preacher to Mary of Modena, Duchess of York, afterwards Queen and wife to King James II and VII, the true Stuart monarch of England, Scotland, Ireland and France.

St Claude lived the life of a Religious even in the Court of St. James and was as active a missionary in England as he had been in France. Although encountering many difficulties, he was able to guide Saint Margaret Mary by letter.

Oddly enough S. Claude is thought to have been influenced by the treatise 'The Heart of Christ in Heaven towards Sinners on Earth' by Thomas Goodwin, congregationalist,intruded President of Magdalen College Oxford and sometime chaplain of Oliver Cromwell.