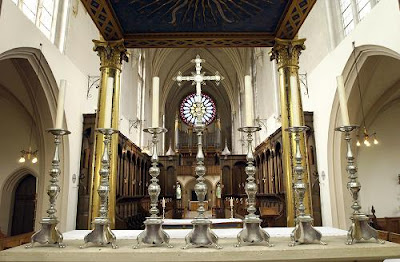 Press Release from the LMS

The conference will run from Monday 24 August to Friday 28 August 2009 and will feature Traditional liturgies in London Colney’s magnificent Ninian Comper-designed chapel together with a Gregorian Chant schola and polyphonic choir.

Expert tuition in the celebration of Mass in the Usus Antiquior will be provided on a small group basis. There will be guest lecturers and all participants will receive 1962 Missals.

As well as daily Sung Mass, devotions will include Lauds, Benediction and Rosary.

The subsidised fee to participants is only £115.00 which includes full board and accommodation. Places are limited and priests are urged to register as soon as possible.

Further details and registration forms can be obtained from the LMS office (Tel: 020 7404 7284) or downloaded from the LMS website, http://www.latin-mass-society.org/

Mark Johnson, lead organiser, said, “We are extremely pleased to have the backing of the Archdiocese of Westminster and Archbishop Vincent Nichols. This conference – our first at London Colney – builds on the success of our two previous conferences at Merton College, Oxford. I hope the laity will tell their priests about this wonderful opportunity to learn the Usus Antiquior in a welcoming and recollected environment.”

I'll see if I can get a supply but it is shame it is not happening in Oxford this year. London Colney hasn't quite the excitement of Oxford bookshops, Oxford friends dropping by and Oxford gossip. I found last years Conference at Merton College in student accomodation a little austere, the Spartan expectations of some members of the LMS committee make me shudder just a little.
at June 02, 2009

Alright before you start the last paragraph was -slightly- tongue in cheek.

And all this with the Blessing of Archbishop Vincent Nichols and Westminster.... Praise be to God!!! He's only been in office a few days - what a start.

Hopefully the Conference will be a 'sell-out' with as many Priests as can possibly be accommodated taking part. Parishioners should help their Priests where possible with the costs - £115 seems such a small sum to pay for the 'priceless gem' that is the Latin Mass of ages, that will be brought back to each parish.

This is good for England and great for the Catholic Church.

"Tongue in cheek" Father, or euphemism?

As Archbishop of Birminghan, Archbishop Nichols was very supportive of the first Merton event - indeed, he celebrated the opening Mass, albeit in the Usus Recentior, but still in Latin. So one shouldn't be surprised at his support for a similar event in his current diocese.

Seriously, Any idea of how many priests in the UK now know how to do TLM?

Is the picture with those splendid choir stalls the chapel at London Colney?

old believer,
Yes, it is.

Gem, It is difficult, 5%(?) but the number is growing, it tends to be the younger (and maybe the brighter) clergy. That seems to be the American experience, most students from the NAC temd to be able to say it.
Our own provincial seminary, half the teaching staff seem to say it.

5% in just 2 years isn't a bad start at all. I expect some of them are elderly priests, but still my guess would be of that 5% the majority, as you say are the younger ones.

I notice a "problem" here too with the hippy age priests. The ones in their 60s who poo-poo the latin Mass. The priests who are old enough to have said it for a while, tend to be sound, but it's the ones who were in the seminary in the mid-60s that seem to be the problem children. Now entrenched as pastors, and in the diocesan offices, they seem to be the biggest obstacles. From where I sit anyway.

About 2 months ago, before Mass, a fairly young man of about 30, came to the sacristy and wanted to know if our parish ever had the Latin mass. The pastor was there, and he quickly said "NO, and there won't be as long as I'm pastor here." The young man quickly blanched, and I said "..but there's a new parish, St. Anne's that has the latin Mass." And Father, realizing how hostile he sounded (and was!) said "yes, you can go to a Latin Mass down there." Then the man left, and Father M. turned to me and said "He's FAR too young to have grown up with the Latin Mass." the pastor is 64, and precisely "the hippy age." I don't know what they were putting in the kool-aide in the seminaries then, but it was "Jim Jones" strength.

Of course, I decided it was probably a good idea, not to mention to the pastor that by then I'd been going down to St. Anne's myself for daily Mass about 4 times a week. It's a) quick b) never adlibbed, and on Mon/Tues I can make it to work in plenty of time. And our pastor adlibbing drives me crazy. It wasn't a "problem" until the priest who used to have the late Sunday Mass was retired from that supply slot and the pastor's now got that one half the time. Father S. NEVER adlibed. He's going to be 81. I'm almost 53 -- just old enough to remember that in some respects "we wuz robbed." I went from seeing my catechisism books have substance to utter crappola. I think the NO is good IF DONE RIGHT. i.e. no adlibs, stick to the script and if the priest doesn't try and be Mr. Personality. Because, frankly, most people are and were lazy in following along with the Latin Mass, "Back in the day." HOWEVER, I think it's fine for the "self-selecting." And a positive antidote for parishes with priests who insist on being Mr. Personality when saying the Mass. Oh, the sermon's fine, and before and after Mass -- but please, keep the adlibs down to non-existant as much as possible.

The current pastor of St. Anne's, the Latin Mass church is only 41. I'd asked him if he grew up in a home that went to the Latin rite, and was surprised to tell me that he hadn't. He'd been in graduate school and in his 20s before he ever saw one. When I mentioned benediction to him, he said he'd not experienced that until his 20s either -- he'd HEARD about it, then asked his own pastor, in Pittsburgh, what it was like. The priest apparently looked at him and said "oh, NO. I'm sorry. We really DID let things slip."

If you thought the student accommodation at Merton was a little spartan, I suspect that you will find the former nuns' cells at London Colney penitential. Remember, it is all good for the soul.