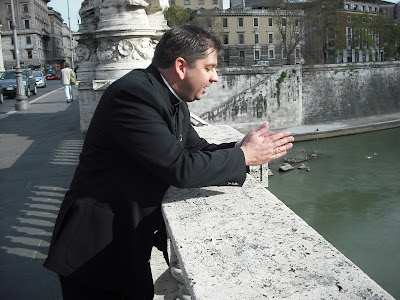 Jeffrey Steel, an Anglican clergyman in Durham announces on his blog his intention to leave the C of E and become a Catholic.
It is often difficult for those of us in the Church to understand the difficulties of those considering swimming the Tiber, it is not just the loss of security for themselves and their families.
For one Anglican clergyman I know who considers his orders valid, and they most probably are, he prides himself on the impeccability of the catholicism of the liturgies he celebrates are , he uses both Roman Rites. He recognises the authority of the Pope, he lives a celibate life etc etc. He sees around him Catholic clergy, including bishops, whose praxis in many ways is not within the Catholic tradition and whose theology is somewhat dubious.
In many ways his situation is similar to the SSPX, he considers himself more Catholic than the Pope, the problem is the Pope doesn't recognise him as being in "full"communion with him, but he like the SSPX sees a "pure" Church that exists over and above the messy Catholic Church that exist in reality, and always has.
Pray for the unity of the Church.

I am writing to make the announcement that I am becoming a Roman Catholic along with my wife Rhea and our six children. I realise that this decision is going to make some really happy, some very sad and others possibly angry. But, I have made the decision with the deepest sense of integrity and by conscience. I would like to share a bit of my faith journey though there are many gaps here, it is descriptive of my heart over the past few months. This is not particularly an academic account of what I have done in my studies but rather the spiritual wrestling that went on within me. The announcement was made this morning in all three parishes where I serve and is now a matter of public knowledge. My duties and licence in the parish end on 14 June 2009 (Corpus Christi Sunday) and my reception into Holy Mother Church is forthcoming.

I'm sorry, but your Anglican clergyman is simply wrong. If he recognizes the Pope, then what is he doing in the Anglican Church?

And the Catholic Church is correct in saying that all orders outside the Church are wrong. It's not only about externals but what you are taught about the truths of the faith.

It's not just about prayer; when people like your Anglican friend remain Anglican probably for deep-seated and mistaken cultural reasons.

Father
it is a belief generally held by some Anglicans that their orders are valid but Rome has been clear on at least two occasions - the last one under Leo XII - they are all invalid due to the break of apostolic succession when the pre reformation appointed Anglican bishops died and I believe in their form as well.

I also think that the impediment, in my experience of married clergy with the spouse and family, has to be very carefully considered by all involved. The sacrifice required of a Catholic priest is not something a married man can easily enter into even if they had been a minister in a protestant ecclesial communion.

I also find it strange that someone could consider their oders "valid" and not think of the requirements in the Latin rite of celibacy.

I wish the man and his family in question well but I do think there is increasing questioning of married clergy and the limits it places on a priestly ministry.

Invalidity of Anglican Orders was declared by Apostolicae Curae in 1894. From 1928 onwards, the C of E was at pains to ensure Old Catholics, whose orders, according to the theology of Ap Cur, were valid were involved in the ordination of Anglican bishops. Therefore when the former bishop of London was ordained priest he was ordained conditionally.

Congratulations, but I hope he is not going to be ordained as a catholic priest. The anglican communion ordained women 15 years ago, and so he entered ministry accepting their validity. It undermines priestly celibacy, especially when they are given charge of a parish. In Salford diocese they have even made a married priest an episcopal vicar - which can't be right.

Really Father, your posts used to be of such good quality that i would daily read your pearls of wisdom - however, of late, you really are proving very disappointing!

first we had to endure your unfair and unjust rant about the Church and Clergy in Ireland. Now this nonsense!

Rome has spoken on the matter of Anglican orders - not just pope Leo XIII but pope John Paul II also - and therefore the matter is closed. They are totally null and utterly void - and you really are very wrong, and dare I say disobedient, to have an opinion to the contrary. It is irrelevant that you may think that this mans orders "most probably are" valid. the Church infallibly has declared that they are not.

Finally, thie Protestants situation is not even vaguely similar to that of the SSPX who are validly ordained members of the Holy, Roman, Catholic and Apostolic Church who, for reasons of discipline, are under the canonical penalty of suspension. Should the day of their full reconcilliation come, then their Confirmation and Ordination will be accepted. They do not need to be received into full communion, but simply be absolved of censure.

O do hope and pray, Reverend Father, that you stop taking whatever medication you have recently commenced and that you return to your senses.

However it strikes me you have never read AC, if you had you would understand it dealt with historical matters, which the Anglican Communion sort to rectify by introducind Old Catholic orders.

I suggest rather than reading my blog you read what the Church is really saying or if you must come here, have the good manners just to think about is being said. I expect readers to have just a little intelligence, if you lack that, there are other places on the net you will most be welcome, but not here.

The 'Dutch Touch' is not sufficient to rectify all the defects in Anglican Orders identified by Apostolicae Curae , there is also the matter of intention. Graham Leonard had documentary evidence dating from his ordination to the Anglican priesthood that in his case was sufficient to raise a prudent doubt that his orders might not have been invalid. Though Jeffrey Steel was ordained to the Anglican priesthood by a 'Flying Bishop' there are unlikely to be such convincing proofs in the event of his being given a dispensation from the Holy Father for ordination to the priesthood (the only source from whom such a dispensation can come). So if it is approved by the Pope, I for one would forebear to object.

Flabellum,
In the case of Graham Leonard, although he had documentary proof of "a pedigree", there was still sufficienr doubt about his priestly ordination that there was a necessity for conditional ordination. There seems no doubt about the invalidity about his Episcopal ordination being invalid,

Ap. Cur. dealt with defect of form and intention in a historic context but there is also an collegial dimension to validity.

Yes Fr Ray..absolutely right about Mons Leonard..who I spoke with at the weekend..

Unlike the other commenters, I'm very much in agreement with Fr Ray on this.

Anglican clergy who convert are generally very orthodox in their beliefs, very much in tune with Pope Benedict as regards liturgy.

And I don't believe that the presence of married Anglican converts they undermine the Church's discipline of clerical celibacy.

On the contrary, it is a sign of the strength and wisdom of the Church that it can maintain such a historic discipline while at the same time exercising a degree of flexibility, charity, and pastoral sensitivity with regard to converts.

Let me first of all say thank you to Father Blake for the welcome. Your prayers are much appreciated. Just so there is no confusion, I am not arguing for the validity of my orders in the Catholic Church. Once received, I will be a lay Catholic doing his best to be a Catholic theologian and serving Christ and His Church as faithfully as I can in obedience to the Magisterium. IF the Catholic Church ever comes to believe that I do have a vocational call to priesthood then I will receive ordination to the diaconate and priesthood in the normal way as a result of a dispensation from the Holy Father.

Right now, I am simply looking forward to being receieved as a Catholic with my family in obedience to my conscience. Thank you all for your prayers.

Celibacy is a requirement of the Latin rite in the West, and became obligatory only with the Lateran Council of 1215. The Eastern rites in communion with Rome have a married clergy. Celibacy is a noble ideal but in those circumstances can it be considered integral to the Catholic ministry? After all Peter - the Rock - was married.