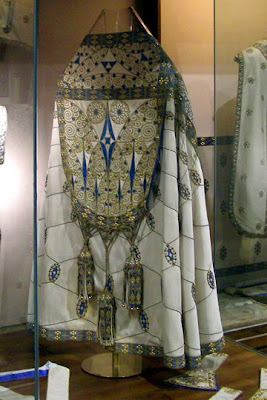 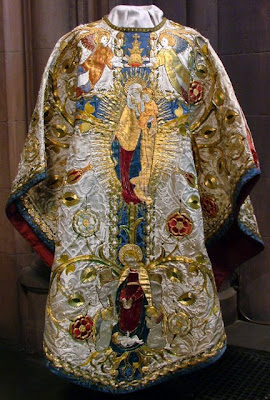 The Lion and the Cardinal has pictures of some amazing 20th century vestments, they come from the same stable as the vestments we wore here for Corpus Christi, they apparently belonged to one of my predecessors, Mgr George Wallis, who was parish priest here from 1924 until 1950. 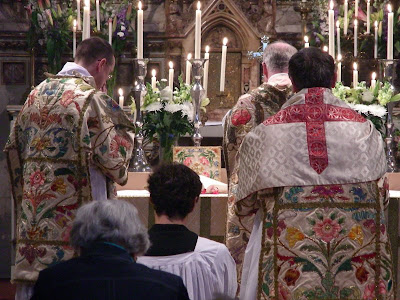 Apart from being the last parish priest to employ a butler, Mgr Wallis established St Mary Magdalen as a centre of liturgical good practice, somewhere which was very much part of the Liturgical Movement. Mgr Wallis had been the Master of Ceremonies for the consecration of Westminster Cathedral in 1910, he had been recruited by Cardinal Bourne and was involved in formulating the solemn liturgy for the new Cathedral. Wallis was very much part of intellectual Catholic life, he numbered Belloc and Chesterton amongst his friends, he invited the great preachers of his day, men like Vann and Knox seemed to be regulars here. 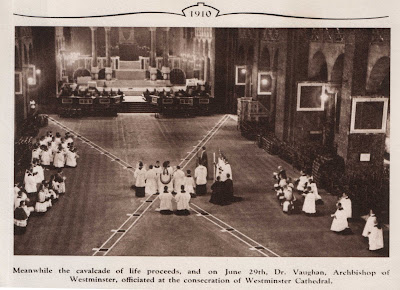 Shawn Tribe has an interesting little piece on the concept of "noble simplicity", a term that is used by the Second Vatican Council when speaking about the liturgy, which has led those who followed the council to introduce brutalist functionalism and iconoclasm into Catholic churches. Shawn's argument is that the term springs directly from and should be interpreted in terms of the pre-concilliar Liturgical Movement. He says it should be seen in the terce forms of the Latin Rite. Here, those who remember him, say that Mgr Wallis understood the nature of the Roman Rite in terms of "no fuss", a rather strict interpretation of the rubrics, which manifested itself in terms of him saying "We are the chant parish, the Sacred Heart [the parish next door] is the polyphony parish". I don't think polyphony was actually forbidden here but it was less favoured, and seems as was the custom in Westminster Cathedral, to have been earlier rather than late. The present parish MC, who remembers Mgr Wallis, says he restricted hand kissing except were the Rite explicitly demanded it, regarding it as being "a continental custom" - stange, as Monsignor though English, had been at school in France and even studied at the Gallican College and retained a strong French accent until his death.
at June 16, 2009

The present parish MC, who remembers Mgr Wallis, says he restricted hand kissing except were the Rite explicitly demanded it, regarding it as being "a continental custom" - stange, as Monsignor though English, had been at school in France and even studied at the Gallican College and retained a strong French accent until his death.

A typically English attitude. One of the priests who used to say the 1962 rite at St. James', Spanish Place on Sundays, took exactly the same approach.

Had Mgr. Wallis read Adrian Fortecue's introduction to 'Ceremonies of the Roman Rite Described'? One suspects so or he was expressing a similar view to Fortesuce who wanted to limit genuflections as well as oscula and simplify the ceremonies.

I suspect Wallis and Fortescue knew one another. Fortescue spoke at Westminster during Wallaces time.
The trend to "simplify" was very much part of the Liturgical Movement. I think this is what initially guided Bugnini.

For what it's worth re: the "hand kissing" business, my own friend, the "sainted Msg. S." nearing age 81 always hated "that European/continental hand kissing stuff." His words, not mine! I gather he did it because he was "supposed to" but no more than absolutely necessary. Wouldn't surprise me if he had his fingers crossed when he had to do it!

BTW, I bet someday your own now young parishioners will be talking about "Blessed Raymond" some 40 years hence. "well, we were an average/decent parish, but Blessed Raymond reintroduced the splendors of the Rite." :-D

How exciting it would be to live then and have a choice between "traddie" plainchant - or, if feeling deliciously rebellious, I could go next door for some dangerous modernist liberal Palestrina .......perhaps even a few lady sopranos.