Catholic adoption agencies 'will not co-operate' over new equality laws 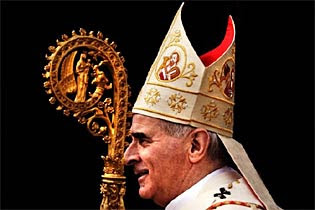 SCOTTISH CATHOLIC adoption agencies will defy new anti-discrimination laws, the Church warned last night, as the row over allowing gay couples to adopt threatened to divide religion and politics.
The argument was sparked by new equality laws being brought in by Westminster which would make it illegal to discriminate against anyone on the grounds of sexuality. This would include a Catholic adoption agency turning down a gay couple for adoption and has led to outcry among religious groups.
read more
at January 27, 2007

The return to paganism in England is full sail now.