Outed, Orientated and Getting My Fix 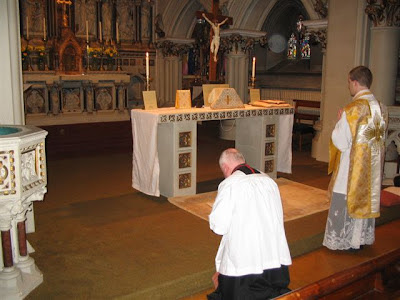 This appeared on Joee Bloggs' Catholic Londoner in the comments section, I confess, I am the priest concerned, I have been outed!

"Anonymous said...
Recently our parish priest in Brighton has started to say an evening Mass ad Orientem, once a week, it is Novus Ordo, in the vernacular. It brings a new dynamic to the liturgy, we can see his whole body (legs and all), there is no barrier between him and us. Although he elevates the the Body and Blood properly, it is the Ecce Agnus Dei that becomes the focus when he turns finally with the host. There is a real sense that he is offering the Mass on behalf of us, rather than at us. If anything there is a greater sense that he is one of us, it is quite beautiful. The other thing that is beautiful is the silence, there are often less than a dozen people there but I don't think it is the lack of people that makes the difference it is that it is God-centred."

Ad orientem, facing east, is actually a legitimate choice for saying Mass, well actually it is more than that, the Roman Missal actually gives specific directions about the priest turning towards the people at the words "Pray brothers..." and at the "This is the Lamb of God...". The presumption is that he is not facing the people at other times. Cardinal Hume used to say Mass in his private chapel facing east, Pope John-Paul II had his private chapel changed from its Paul VI design so that he could face east, Benedict too faces the traditional direction for Christain prayer.
I must confess that I hope the forthcoming Papal response to the 2005 Synod on the Eucharist will encourage facing East, as does Pope Benedict's book The Spirit of the Liturgy.
Why? Because I think it encourages prayerfullnes. The Taize Community in their directions for conducting prayer services specifically says that everyone should face the same direction so that God is the focus of worship. I remember talking to the Abbot of Caldey years ago, who had had a group of teenagers living with the community for a week or two, sharing in the offices and Mass, he said he was shocked when one of them asked, "Father, when do the monks actually pray?"
I am not a great fan of the Tridentine Rite Low Mass, not now we have microphones but it is pretty obvious that it is prayerful; the orientation of the priest, the fact that not everything is said aloud points to this. I do like not having a barrier between me and the people, standing behind the altar seems to encourage a school teacher mentallity amongs the clergy, them and us, wheere as facing the same direction indicates solidarity with the people in the face of God. To me it seems more than reasonable that when one talks to people one faces them, when one talks to God one faces him, or at least looks at the Crucifix and talks to God through the image of his Son.
My once a week "fix" on a Friday evening is very important to me, it is an extra Mass so if people don't like it they don't need to come to it but for me it helps to re-orientate my celebration of the Mass, previously the only time I got the chance of celebrating this way was when I was in Rome and could get to St Peter's or one of the great basillicas where none of the side altars have been moved. For a priest it is important that he remembers that he is really there to pray for and on behalf of his people, praying is his most important and most useful function.
at January 23, 2007

This is heartening news Father. I admire your decision, and hope more Parish priests will be follow your example. Ad multos annos!

Bravo! God Bless you for this Father!

Bravo, father! I am lucky at the church I attend ( www.holyname.co.uk ) for all masses (generally in the vernacular)to be celebrated facing East not just on Sundays but thoughout the week. Hopefully more priests around the country will follow your lead.

I look forward to Mass at St Mary Magdalen when I next visit Brighton!