In Britain, the Church must always submit 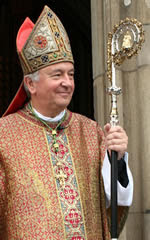 It seems one of the favorite British sports, equally appreciated in England and in Scotland: to force Catholics to submit to the almighty State. Yet, how could an objective assessment of the events surrounding the current "Gay Adoption" Church-State confrontation be any different from this?
Oddly, had the Catholic position been more hardline, it might have stood more of a chance. But once Vincent Nichols, the Archbishop of Birmingham, admitted on Tuesday’s Newsnight that his agencies were happy to place children with single gay people, but not couples, his argument fell apart. Surely two parents are better than one? If single homosexuals are acceptable, why not a couple committed to each other? The widespread view was that he couldn’t have it both ways: either homosexuality was wrong or it wasn’t. Equally, Catholic agencies are prepared to place children with cohabiting heterosexual couples, even though the Church disapproves of sex before marriage. As one Cabinet minister put it: “If there was a religious principle at stake here, they sold the pass several years ago.” (source)
As always in its difficult history in the "Sceptered Isle", the Catholic Church, whose local prelates now rightfully demand a clear exemption from this iniquitous law, would now be in a much better position if its hierarchy had consistently stood for clear, Traditional, Catholic principles.
from Rorate Caeli
There is a good article by a gay man in the Telegraph
at January 27, 2007

As always in its difficult history in the "Sceptered Isle", the Catholic Church, whose local prelates now rightfully demand a clear exemption from this iniquitous law, would now be in a much better position if its hierarchy had consistently stood for clear, Traditional, Catholic principles.

There is a good interview with Cardinal Murphy O'Connor in the Sunday Times today.28th Jan.