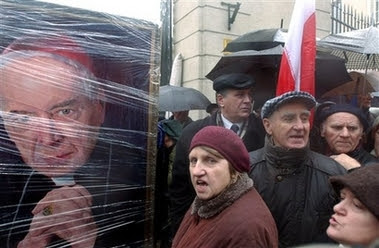 Yesterday, Poland's bishops met:
The Roman Catholic Church leadership of Poland called Friday for all of the country’s bishops to be investigated for past ties to the secret police.
“We will ask a special commission to check the past of all our bishops,” the Council of Bishops’ chief, Jozef Michalski, told reporters in Warsaw after the episcopate’s 45 bishops held an emergency meeting to deal with the worst crisis to hit the Polish church in years.
And:
The Vatican is to receive reports on the activities of all Communist-era Roman Catholic bishops in Poland, their spokesman Jozef Kloch said Saturday. He said the decision was taken by Friday's extraordinary meeting of the Permanent Council of the Polish Bishops' Conference to discuss the church's involvement with the Communist-era secret service.
Teresa at Papa Ratzinger reports (post 5692, bottom of page) Her comments in italics:
At least two Italian news reports today are citing statements made yesterday by the secretary-general of the Polish bishops conference that it did inform the Vatican of 'signs of unease' about Mons. Wielgus. Here is how korazym.org reports it: The secretary-general of the Polish bishops conference, Mons. Piotr Libera, said the Holy See knew about Wielgus's situation [presumably, his collaboration], in effect giving the lie to Cardinal Giovanni Battista Re, Prefect of the Cognregation for Bishops, who told the Corriere della Sera on January 6 that "we knew nothing at all about this." Linera said 'the signals of unease' were sent to the Vatican about Wielgus. [I am translating from the Italian 'i segnali d'inquietudine', so I do not know if that was how it was expressed in Polish as well. I truly would welcome a fuller account of his statement from the Polish press, because if he had said this to newsmen, the obvious follow-up question to him would be: "What signals, and why only signals, not a direct statement?" ] He added, however, that the Vatican was able to see the 68-page documentation by the Institute of National Memory about Wielgus's involvement with the secret police only after it had been published in the Polish press.
And, today the Pope, in addition to some Italian and South American bishops, met with:
Em.mo Card. Giovanni Battista Re, Prefetto della Congregazione per i Vescovi
I guess he would...
at January 13, 2007