Pope says Christians should embrace persecution as source of blessing 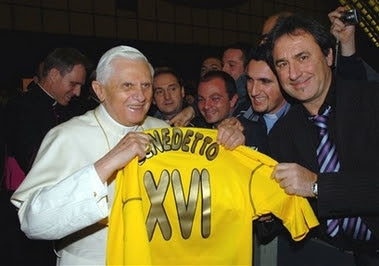 By Cindy Wooden Catholic News Service VATICAN CITY (CNS) --
The Christian community and its members always will face persecution and suffering, but they should embrace it as a source of blessing, Pope Benedict XVI said.Speaking at his Jan. 10 general audience about the ministry and death of St. Stephen, the first Christian martyr, the pope said the persecution of the early Christian community is what pushed the disciples to leave Jerusalem and bring the Gospel to the world."Even in our lives the cross, which is never lacking, becomes a blessing," the pope said.And by accepting suffering in the knowledge that it will lead to growth and blessings, "we learn the joy of Christianity even in moments of difficulty," Pope Benedict said.St. Stephen, he said, "teaches us to love the cross because the cross is the path Christ always uses to arrive in our midst."The pope also spoke about the ministry of St. Stephen, who was elected by the Christian community and confirmed by the apostles as one of "seven reputable men, filled with the Spirit and wisdom," charged with distributing charity.The fact that St. Stephen and the other six also preached the Gospel, he said, is a reminder that "charity and proclamation always go together."The pope touched briefly on the fact that before having them begin their ministry, the apostles laid hands on the seven, which is why many Christians see them as the church's first deacons.Pope Benedict did not refer directly to theological discussion over the possibility of ordaining women deacons based on New Testament texts describing community leaders laying their hands on the heads of women chosen to carry out specific tasks on behalf of the community.However, he said, the gesture of laying hands on someone's head "can have different meanings. In the Old Testament the gesture mostly has the significance of transmitting an important charge."Sts. Paul and Barnabas were anointed that way before being sent off to evangelize the gentiles, as was St. Timothy, he said.Pope Benedict said that St. Paul's descriptions of the power of the laying on of hands and the need for discernment prior to anointing someone in that way demonstrate an evolution in the meaning of the gesture, which later developed "in the line of a sacramental sign."At the end of the audience, Pope Benedict greeted 30 members of an international soccer team made up of priests. The priests gave him a yellow jersey with his name in Italian, "Benedetto," and his number in Roman numerals, "XVI."
at January 10, 2007

Is there a possibility of women being ordained as deacons?

I don't think they can be ordained deacons, priest is certainly not a possibility but the Church could re-institute the ministry of deaconess, which was different and mainly concerned with the care of women.

I was fortunate to be at this audience,the Holy Father radiates such a great sense of joy,was wonderful to see him.