Mount Athos on the Pope, the Patriarch and the Metropolitan 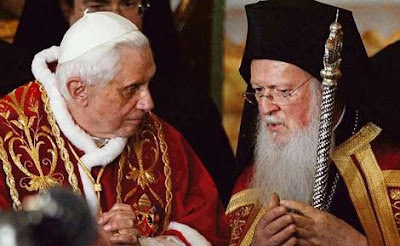 If it is good Athos is against it", the Superiors of the Monasteries of Athos condemn the visit of the Pope to Istambul and Archbishop Christodoulos to the Vatican. A friend of mine who wanted to visit Athos was told to pretend to be a Methodist rather than a Catholic if wanted a welcome - here you can see why.

"First of all, the Pope was received as though he were a canonical (proper) bishop of Rome. During the service, the Pope wore an omophoron; he was addressed by the Ecumenical Patriarch with the greeting “blessed is the one who comes in the name of the Lord” as though it were Christ the Lord; he blessed the congregation and he was commemorated as “most holy” and “His Beatitude the Bishop of Rome”. Furthermore, all of the Pope’s officiating clergy wore an omophoron during the Orthodox Divine Liturgy; also, the reciting of the Lord’s Prayer, his liturgical embrace with the Patriarch, were displays of something more than common prayer. And all of this, when the papist institution has not budged at all from its heretical teachings and its policy; on the contrary, the Pope is in fact visibly promoting and trying to reinforce Unia along with the Papist dogmas on primacy and infallibility, and is going even further, with inter-faith common prayers and the pan-religious hegemony of the Pope of Rome that is discerned therein."
If you want more bitterness read the whole thing
at January 12, 2007

«We believe that our Holy Orthodox Church is the One, Holy, Catholic and Apostolic Church of Christ, having the fullness of Grace and the Truth, and for this reason, an uninterrupted Apostolic Succession. On the contrary, the “churches” and the “confessions” of the West, having distorted the faith of the Gospel, the Apostles and the Fathers on many points, are deprived of the hallowing Grace, the true Sacraments and the Apostolic Succession..."

The heresy of Donatism by another name.