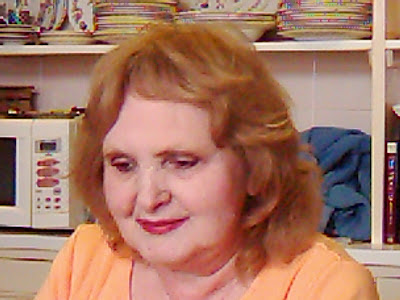 Of your Charity pray for the repose of the Soul of Ann Roberts who, fortified by the Sacraments of Our Holy Mother the Church, died last night.

Ann, was an incredible woman, her husband died about twenty years ago after being received into the Church, shortly afterwards Ann too was received into the Church, from that time onwards she worked tirelessly for the poor in Brighton. She started our souprun, with the help of others, year after year, summer and winter, rain and gale she fed the hungry. In her quiet and gentle way she helped so many begin their journey form the gutter to normal life. Last year she was named one of the Catholic Woman of the Year.

She needed a new hip, during the last summer she developed a kidney infection and had been in hospital ever since, she died last nigh of a heart attack.

She leaves two adult daughters Amanda and Claudette, and many friends.

Ann was an amazing woman with a wonderfully dry sense of humour. I remember spending a very entertaining Easter Monday morning sitting in the presbytery kitchen listening to Ann R and Anne F joking with each other; Ann, resplendent in her pink coat, dragging on her extra-long length cigarettes. It was meeting people like Ann that brought me back to the church. R.I.P

Ann's death is a dreadful loss for the parish and for Brighton. May she rest in peace

So many people are ging to miss her especially on the seafront.

May the chorus of angels receive you and with Lazarus, once poor, may you have eternal rest.

We must try to do something to continue her legacy of feeding the homeless.

Iwas in the same class as Ann at the Sacred Heart in the early fifties and I always remember her as a lovely person,although she was a "non catholic" at the time she always came to Benediction on Thursdays when we all went next door to the Convent.When we left we were never in touch but got on with our lives.I re-met her in the Pub on Fridays after the Soup Run and used to reminisce about various Teachers and goings on.She is irreplaceable for Brighton and will be very very sadly missed by the Parish.

I knew Ann, although I hadn't seen her for some years. A living saint if ever there was one! When is her Requiem Mass?