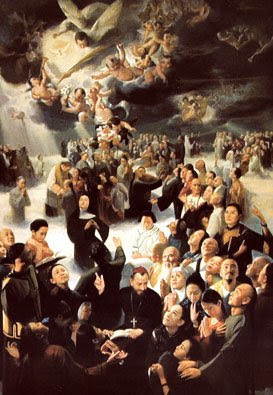 Painting commemorating the 120 Chinese Martyrs canonized in the year 2000
The American sites seem to be concerned with Abp Wuerl allowing Holy Communion to be received by Ms Pelosi the new speaker of the House of Representatives, a Catholic, but a consistant voter in favour of pro-Abortion, pro-Gay Rights lobbies. One American ishop asked whether he would forbid pro-abortion politicians replied with, "But these are my friends", nepotism worthy of the Borgias! In this country it most probably would not even be an issue. I suppose for me as a priest I would be unwilling to act without episcopal support. Time and time again we seem to want to co-operate with the status quo rather than take any stand. I cannot help but see parallels with the Wielgus situation in Poland, it was his compromise with the civil authorities that lead to his downfall.
Fr Zuhlsdoprf has an interesting post on the Martyrdom of Saint Lawrences, and finishes it by this account of Fr. Tan Tiande who suffered years of impisonment and torture for the faith.
"My crime was my conduct: preaching religion accounted as little my sentence. Given that this was the worse crime you could be accused of, I was dragged into a public gathering to be criticized and denounced as guilty. I was the "leading man", the object of criticism by my companions.
The "director" had bound my hands behind my back. The "make-up man" had hung a square sign around my neck which also hung down behind my back. The "director" led me onto the stage and read my crime to the public: frequently preaching religion in prison with no sign of penitence. The sentence was for life. When the sentence was pronounced, they made me lie down on the ground in front of the thousands of people there watching the show. My legs were extended behind me and they bound them around with chains weighing many kilos. In that moment I felt the roar of the throng before the stage. I don’t recall even a single word of what they were shouting. I only know that I was at peace.
"Still believe in God?", the party functionary sneered with his mouth curled.
"Why not?" I responded.
"Since you believe in God, why doesn’t he come to save you?", he said to toy with me.
"God is free to save me or not. Whatever happens, I believe in him firmly."
"Try a little taste of these chains on your legs", he said. And he left.

The Burmese government has just issued a "Programme to destroy the Christian religion in Burma" , pray for Fr Gregopry and Fr Pius, two Burmese priests from Karen Province who I lived with when they came to study monastiscism in England in the 2000 and returned home.
In a world where so many suffer for the Sacred Faith the example of these holy men demand from us priest, bishops and lay people, a bit more than compromise.
at January 22, 2007

The situation of the Church in China is a very grave wound to the unity of the Catholic Church. To the underground Chinese Catholics, as well as Catholics in Taiwan, the Vatican's uncertain position, even when its own norms are violated, strike them as a deep betrayal.

Look at it this way. If you're an underground Catholic Bishop in China, then you risk everything, including life and limb, for your fidelity to the Pope. Whereas the official 'Bishop' is sitting in your residence and saying Mass in your Cathedral, you're forced to hop from house to house, always fearing the police who are but a step behind. You are jailed for years and tortured, but still you keep the Faith. But others who have betrayed the Faith and accepted ordination from government 'Bishops' are then recognized by the Vatican. How would you feel?


Official church priests also often receive training at overseas dioceses and preside at Masses there, despite a Vatican ban on any form of communio in sacrs with these clerics. Underground priests live on the little that their already poor flocks have to spare.

The late Ignatius Cardinal Kung, the Mindszenty of China and Bishop Joseph Meng are prime examples of faithful bishops, who underwent great persecution for their loyalty to Rome. The only modern equivalents would be the Greek Catholics under the former Soviet Union.

Is the Vatican encouraging these faithful to betray the Faith?

The Vatican is also willing, 'this very night' as high officials have publicly said, to move the Vatican embassy to Beijing from Taiwan where there is religious freedom.

What message does this politicking send to the Chinese faithful?

Intransigence is rewarded by concession after concession and fidelity with betrayal. The faithful are made bargaining chips in the political power play.

Its high time the Church stood up to the Communists and let the Holy Spirit do its work to bring down this atheistic government as it did the Soviet Union.