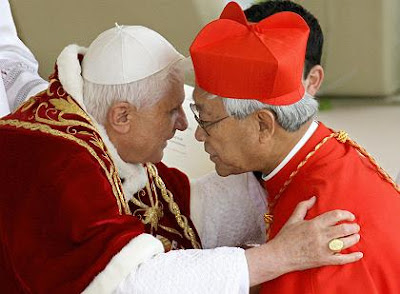 ROMA, January 19, 2007 – Beginning today, a “sub secreto” meeting is taking place in the Vatican on the subject of the Church in China. Participants include key members of the secretariat of state and of the congregation for the evangelization of peoples, but also personalities from outside the curia: the bishop of Hong Kong, cardinal Joseph Zen Ze-kiun (in the photo, with the pope); cardinal Paul Shan Kuo-shi, of Taiwan; the bishop of Macao, José Lai Hung-seng; and professor Anthony Lam, from the Holy Spirit Study Centre in Hong Kong. At the center of attention is a question evoked by Benedict XVI in the Angelus of December 26, 2006. After recalling the protomartyr Saint Stephen and all those who today “are persecuted and suffering in various ways for their witness and service to the Gospel,” Benedict XVI continued: “I think of those Catholics who maintain their fidelity to the See of Peter without ceding to compromises, sometimes at the price of grave sufferings. The whole Church admires their example and prays that they have the strength to persevere, knowing that their tribulations are the font of victory, even if at that moment they can seem a failure.” The news from China in recent weeks confirms this rift between the Christians who bow to the commands of the communist authorities, and those who resist them; between the official Church created by the regime in opposition to Rome, and the one that is united with the pope and not officially recognized by the state.
read more
at January 20, 2007