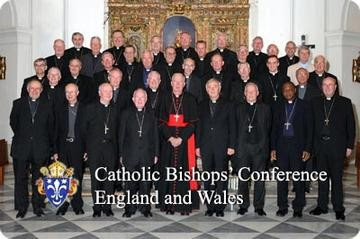 Apparently Bishop O'Donahue of Lancaster has written scathingly about our own Bishop's Conference, which of course was described as the "best in Europe" by the last Nuncio.
Just to add fuel to the fire of debate, I think this excerpt from "The Ratzinger Report", a book length interview with the former Cardinal published in 1985 might be of interest.

Here is an excerpt in its entirety:

"The decisive new emphasis on the role of the bishops is in reality restrained or actually risks being smothered by the insertion of bishops into episcopal conferences that are ever more organized, often with burdensome bureaucratic structures. We must not forget that the episcopal conferences have no theological basis, they do not belong to the structure of the Church, as willed by Christ, that cannot be eliminated; they have only a practical, concrete function."

It is, moreover, he says, what is confirmed in the new Code of Canon Law, which prescribes the extent of the authority of the conferences, which cannot validly act "in the name of all the bishops unless each and every bishop has given his consent", unless it concerns "cases in which the common law prescribes it or a special mandate of the Apostolic See... determines it" (CIC, Can. 455, 4 and 1). The collective, therefore, does not substitute for the persons of the bishops, who - recalls the Code, confirming the Council - are "the authentic teachers and instructors of the faith for the faithful entrusted to their care" (cf. CIC Can. 753). Ratzinger confirms: "No episcopal conference, as such, has a teaching mission: its documents have no weight of their own save that of the consent given to them by the individual bishops."

Why does the Prefect insist upon this point? "Because", he replies, "it is a matter of safeguarding the very nature of the Catholic Church, which is based on an episcopal structure and not on a kind of federation of national churches. The national level is not an ecclesial dimension. It must once again become clear that in each diocese there is only one shepherd and teacher of the faith in communion with the other pastors and teachers and with the Vicar of Christ. The Catholic Church is based on the balance between the community and the person, in this case between the community of individual particular churches united in the universal Church and the person of the responsible head of the diocese."

"It happens", he says, "that with some bishops there is a certain lack of a sense of individual responsibility, and the delegation of his inalienable powers as shepherd and teacher to the structures of the local conference leads to letting what should remain very personal lapse into anonymity. The group of bishops united in the conferences depends in their decisions upon other groups, upon commissions that have been established to prepare draft proposals. It happens then that the search for agreement between the different tendencies and the effort at mediation often yield flattened documents in which decisive positions (where they might be necessary) are weakened."

He recalls an episcopal conference that had been held in his country in the thirties: "Well, the really powerful documents against National Socialism were those that came from individual courageous bishops. The documents of the conference, on the contrary, were often rather wan and too weak with respect to what the tragedy called for."

"Besides," he said, "it is obvious that truth cannot be created through ballots. A statement is either true or false. Truth can only be found, not created. Contrary to a widespread conception, the classic procedure of ecumenical councils did not deviate from this fundamental rule. At these councils only statements that were accepted with a moral unanimity could become binding." (p. 59-61).

Yes Father, a great quote which I recall distinctly from reading the book and have mentioned it elsewhere. The Holy Father hit the nail on the head! Episcopal conferences do blur the role of individual bishops and lead to a 'laziness' on the part of ordinaries who just leave things to the conference and avoid fulfilling their personal responsibilities.

Episcopal conferences are so bogged down in bureaucracy with endless committees, study groups etc. that their pronouncements carry little weight and are rightly ignored in most cases.

Here in the US it is individual bishops like Burke, Chaput, Finn, Bruskiewicz et al. - who don't hew to the "party line" - that are the most trusted and influential. They know their role and don't hide behind conference positions but proclaim the truth "in season and out".

Would there were more like them - here and elsewhere!

I went to mass today at the Catholic church of St. Columba’s in sunny South Croydon for 9am.

I was a few minutes early as always and so had time to collect my thoughts.

The bell rang and a woman stepped onto the Altar unaccompanied.

She must be a special minister I thought - but where’s the Priest?

It wasn't until I heard her say "In the name of the Father, the Son and the Holy Spirit..."

I was in such shock and so disgusted I left the church in a rage.

I’m so glad that loyal young men who have served mass their entire lives are being turned away from the seminary.

After all we wouldn’t want the church to have its fill of priests when there are so many eager middle aged women wanting to say Holy Mass.

I mentioned this to a lapsed Catholic friend of mine who said to me “Well their probably short of people, anyway I don’t see why you let it bother you.”

If you are suggesting that the lady in concern acted as Priestess in a Catholic Church then that would indeed be a breach of Canon Law. Very odd! But I think we would have heard a lot more of it if a lady had got up and actually said Mass.

You sound cross that Holy Mother Church has 'turned away' some loyal young men from the Priesthood. Yet, if we really trust the Wisdom of God, then perhaps we have another vocation.

As a fellow altar server, I've sometimes thought of the Priesthood, but not only does the sacrifice frighten me, but also my weakness. For my weakness is very great.

Pray for me, brother SN, as I pray for you, that we both shall find our true vocation in life.

Exactly why Bishops' confrences should be dissolved