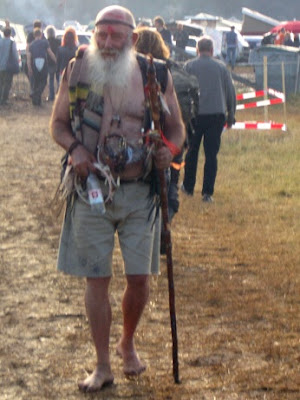 The hippies, as I understand it, were a youth movement from the 1960s. They eschewed violence and preached flower power, but smoked cannabis, promoted psychedelic music and practised fornication (though not necessarily all at the same time).

I don't remember doing these things.

It doesn't do to call someone an old hippy just because their hair is turning grey (not, that is, unless they look like the man in the header photo for this post).

The younger generation have no respect.

As a recent convert in my mid-30's I have been shocked by the behaviour of the older members of my parish. They seem to think the priest is there to make them feel good about themselves rather than to be their spiritual father. When our parish priest arrived he mentioned to an ex-nun who had the 'privilege' of distributing the Host along with the former priest at Communion that, since the numbers at Mass were so small in the parish, there was really no need for an EMHC distributing the Host. She took this very badly, started causing trouble in the parish, and approached the head of the deanery who, taking a dim view our parish priest's orthodoxy and application of the 'Benedictine' principles of liturgical orthopraxy, suggested she and some supporters might want to get up a petition to send to the Archbishop. Which she then promptly did.

The childishness of so many of those in our parish who are 55+ simply appals me. They take umbrage if Father asks them to show reverence towards the Blessed Sacrament by silence. The 'tea committee' got upset when he suggested it might be a good idea if they didn't have a separate bank account from the parish account for the takings after Mass. There was anger after a quiz night contained a round with questions on the Catholic Church (history and saints) - that was the round that had the lowest scores.

Worst of all, the Archbishop offers no support for our parish priest or other priests in a similar situation. Instead he actually appears to take the side of the malcontented faction against our parish priest. It almost seems that he uses these complaints to 'reign in' those priests who lean towards doctrinal orthodoxy (by admonishing them for their 'lack of pastoral sensitivity') or liturgical traditionalism.

There are simply no young people in the parish (other than a few small children) and, with declining numbers, the parish may well be looking at closure in a few years' time. But that doesn't seem to upset them as they can fashion the sinking ship to their own spoiled whims and tastes.