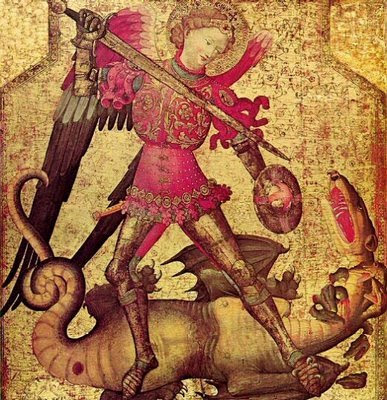 Who would have believed it?

Ecumaniacs are now shouting, "Shut that door, keep them out!"
Trendy Liberals scrawl on walls, "Don't lift the excommunications!"
Sandalistas with their dying breath wheeze, "Keep it the same, no change here!"
And wrinkled white bearded hippies gaze into their navels and remember fondly the days of their youth, hating the present day.
The snake has been struck with a stick and rises and hisses.

Over the last week a little revolution has taken place, a gear has shifted. Is this a skirmish or the beginning of a battle? The noise outside the Church is not that significant, it unnerves, it frightens but it is what is happening inside is actually is really the only important thing.

People talk of the Church thinking in centuries, but actually during the reigns of the great Popes, whose reigns were often short, change was dramatic and far reaching.

Despite the current furore, I am feeling very optimistic about the future of the Church. It's not surprising that those who have spent their entire lives attempting to destroy the Church from within by subverting all her teachings are causing a stirr. They know the house they have built upon sand is collapsing. Nobody outside of a bizrre, sandal wearing clique likes what has been done in the "spirit of Vatican II". Along comes a Pope who follows the letter and they go beserk.

God Bless the Pope!
Our Lady of Victory Pray for Us!

Dare I add that Fr. Finnigan has a letter of support for Pope Benedict.
I have just signed it.
Just go over to The Hermeneutic of Continuity and you'll find it.

Now's the time to brace ourselves for the next storm: We must pray that the Vatican handle the latest scandal over Fr Maciel and the Legionaires of Christ far more proficiently than they did the 'Williamsgate affair' by swiftly pointing out that it was the Holy Father who ordered the investigation into allegations made against him - a very bold and courageous decision to rid the Church of filth etc

You will concede that PR is important in this, the 'Information Age.'

Didn't you read Fr Ray's post earlier today?If I may make so bold Fr Ray has the facts and Fr Tim, the argument, although often it is the other way round. That is why it is essential to check them both out carefully everyday.

Anyway you've signed it and that's all that matters at this stage.

I sense that this is the beginning of the battle and not a skirmish.

We should never have cut out that prayer to St. Michael at the end of Mass.

Father, is there anything to stop you from includding it in the Prayer of the Faithful at all your Masses, EF and OF alike?

Kate says 'You will concede that PR is important in this'.

Some of the problem is the holocaust denier who has had the excommunication lifted. Holocaust denial may not be contrary to the teachings of the church and it isn't what he was excommunicated for but try explaining that to someone who is not a Catholic and it looks bad.

Then there has been the case of the priest who referred to the New Orleans flooding as divine retribution. I thought that was about the US energy squandering affecting the weather but seemingly it was not.

These things could be regarded as scandal since they put unneccessary obstacles in the way of salvation. The Catholic church should not be seen to be supporting and promoting to high places people who would generally be regarded as nutters.

The link is to a discussion on scandal, strictly defined.
New Advent article on scandal

There is a very active FIFTH COLUMN within the Church we must remain alert.

If Jesus could forgive HIS killers and the Holy Father grants absolution to a penitent then we must all forgive those who trespass against us.It should not be too difficult,we have strong leadership.

In a way I hope it's a battle now. At the moment it's like a death from a thousand cuts. The longer it goes on the weaker I think our position gets. There's been a low level intensity civil war going on in the Church for a long time and perhaps this is now the time for the "phoney war" to end.
Being "gentle as doves" has run it's course.

Yes, it is what is happening inside the CHurch that is so frightening. Last Saturday evening, a priest in our parish used the sermon to criticise the Pope for lifting the excommunication from Bp Williamson, and was applauded by the congregation.

The Prayer to St Michael was reintroduced at the end of Mass at Maryvale by Mgr Watson. It is greatly heartening to pray.

Priests should not criticise the Pope in their sermons. Especially not this one who is doing most things right.

Just picking up on Clare's comment, I witnessed a similar incident (a few years ago admittedly) when a priest, on Vocations Sunday, used the sermon to attack celibacy and the male-only priesthood. I could handle that (just about) -- but what really unnerved me were the cries of "hear hear" from the congregation.

I could draw up a long list of off-message sermons that I've heard in my life: semi-veiled attacks on Popes, disagreement with the Church's sexual teachings, criticism of the Rosary, criticism of devotions, criticism of Benediction, criticism of the Traditional Latin Mass, defence of liturgical abuse and (to cap it all) a sermon where the priest used a 4-letter word (he apologized afterwards, admittedly).

One thing I've noticed is that dissenting priests are now much more careful about the thinkpieces they write for the parish newsletter. They know that these can be scanned and posted on the internet -- or e-mailed to Father Z. -- for all the world to see. I'm sure the blogosphere can be a help in preventing a homily from degenerating into dissenting rabble-rousing, but I'm still trying to figure out the best way.