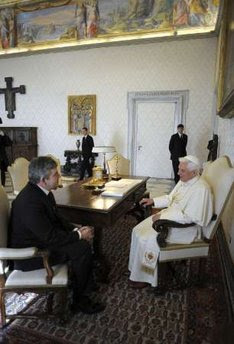 Ruth Gledhill waxes enthusiastically about the possibility of the Pope accepting Gordon Brown's invitation for him to visit the UK. Bless her, she always has something interesting to say about Anglicanism but I am not sure she really has a feel for the Catholic Church.
She says:

The Pope wants to come. He would even like to speak at Oxford, having done so once previously at Cambridge. Health problems as yet unknown might still prevent it, as might the intrusion of other urgent diary commitments. But all these and other things being well, it might actually happen.
Imagine the symbolism of Pope Benedict delivering a speech in Westminster Hall, where Thomas More was indicted and tried for refusing to accept King Henry XVIII as head of the nascent Church of England, where the instigators of the gunpowder plot were also tried and condemned.
Oh how I pray it happens. What a story to cover!

I can see all types reasons why such a visit would a good thing for us in England, not least as a direct call to the rump of the C of E's catholic wing to come into communion with Catholic Church. My big worry is that the way the Church has been moving since the visit of John Paul II. I wonder whether the Bishops will be able to get ordinary Catholics out onto the streets to welcome the Pope with enthusiasm.
I know this might sound cynical but for years we have had not only the secular media but the Catholic press too knocking the Pope, both before and after his election. The "Benedictine project" has not been met with enthusiasm by any diocese or bishop in England and Wales. I really cannot see such a visit being organised by the heirarchy within the time scale Ruth imagines.
at February 24, 2009

True what you say, Fr, but I can imagine tremendous enthusiasm being generated by the Catholic blogosphere, should the Pope decide to visit!
And wouldn't it be wonderful for us to reclaim the church and give it back it's proper place, as Mary's Dowry? Please, Pope Benedict, give us a worthy successor to CMOC.

If it is any encouragement, the French media were astonished last year at the 'turn out' for the visit by Pope Benedict to Paris and Lourdes in September.

The Pope was not due in Lourdes on the Saturday until 7pm arriving by air from Paris where he had celebrated Mass that morning. I was able to watch the Mass in a cafe in Lourdes and by 11 o'clock
I realised that people had already started to stand behind the newly erected barriers. I staked my claim to the one and only bench on the route (providence?)and was soon joined by others and surrounded by the enthusiastic happy crowds. It was nearer 8pm by the time the Holy Father arrived. A long wait often under umbrellas and plastic ponchos during the many downpours.

In order to attend the two Masses celebrated by Pope Benedict I had been advised by one of the Chaplains there to 'come early' and in fact managed to get there shortly after 6am on the Sunday. The sun had not yet risen. The meadow was already half full. Mass was at 10.30! Many young people were in their sleeping bags. A young girl next to me had left her home town at 2am that morning to travel four hours by coach.

By 8am nobody else was allowed into the meadow probably for safety reasons. I later spoke to one lady who had arrived just after 8am after a very long coach ride from Bordeaux but had to watch the Mass on the big screen erected outside the basilica.

His reception in Paris was equally enthusiastic with enormous crowds attending the Mass at the Invalides.

To be present in Lourdes during that time is something I shall always treasure but being English it would be even more wonderful if we could welcome Pope Benedict to Britain. And having witnessed such a welcome in a country like France
would he not also receive the same in Britain?

Please let's not talk ourselves out of such an historic and much needed visit by putting up this and that spurious reason why the Pope might not get a good turnout of catholics should he visit England. I mean for goodness sake what kind of excuse is "Health problems as yet unknown,... the intrusion of other urgent diary commitments" - do me a favour!

Let's at least give Papa Benedict a chance! He's the greatest 'Celebrity' on Earth and the Holy Spirit will draw all the people and crowds that He thinks are necessary.

Can someone tell me why it needs Gordon Brown to invite the Pope. Has there been no invitation from our Cardinal? I mean how do these things work?

Please Papa, bless our glorious land with your presence. Make Our Holy Mother Mary smile and hold out hope for all those faithful Catholics living in 'Her Dowry'.

Some people may use the excuse that we have not got the weather for a large outdoor papal gathering.

All I can say is the weather did not put people off in Lourdes last year. It was extremely wet on the Saturday down there and very cold at 6am on Sunday and Monday. Five layers of clothing with a woolly hat and mittens were necessary!

However the weather miraculously cleared up and stayed fine for the duration of both outdoor Masses. And in Paris (when it was pouring in Lourdes) there was sunshine and blue skies for the outdoor Mass there. Prayers had indeed been answered.

Like George I am baffled that it is the PM who appears to have issued the invitation. Like him I would have thought it should come from the Cardinal. I seem to remember that it was the Bishop of Lourdes and Tarbes who issued the French invitation. However I for one would not mind who issues it if it is accepted at some time in the future. Our country would surely be safer for a visit than the Holy Land at present but I appreciate that any visit would take much preparation beforehand.

I would have thought the invitation would come jointly from the senior cardinals of England, Scotland and Ireland, having consulted their governments out of courtesy and to ensure there are no major events clashes. In England & Wales that could mean after a general election but before the Olympics. Since we know CMOC did not vote for the Holy Father and appears to have blanked the wishes of the HF, I’d have been amazed to see an invitation from Archbishop’s House. I think we have to wait for the next Archbishop of Westminster to ask the Pope over. That’s when we’ll see CMOC on the sanctuary at Westminster Cathedral - an infrequent sight - and Mr. and Mrs. Blair, plus offspring, in the VIP seats at the front. I share the view that there would be a stupendous turnout for a papal visit.
I’m not so sceptical about the Prime Minister’s motives as some. I have a feeling he has a genuine respect for Papa R and may even believe that they share the same moral compass, which they do in the matter of alleviating world poverty, but in very little else.

Father, I took two buses and a train in the UK, a plane, then a taxi, a bus and a train in France in order to get to Lourdes last September for the Il Papa's weekend. And back again. What a time I had! What a tide of love went out to him from the faithful. What blessings we would receive in England if he came to see us....

The very anti-catholic press in Sydney was amazed at the massive numbers that came out to welcome the Pope at the Youth Day recently. Don't be afraid. We in Australia have read of the complete failure of the Church in Britain. No one would expect much from your Bishops, God help you. But you must give yourselves a chance to arise from your stupor. Even the stones will speak out. AMDG

Gordon Brown made the invitation from one head of state to another, and as such, we can expect the Pope will be accorded all the pomp and circumstance his visit deserves.

If it had been done by CMOC and Eccleston Square, there would have been one layman flunky at Heathrow to meet and greet the Pope before whisking him off by Tube to his B&B!

The last "Papal Visit" was during the reign of that Mad Woman,it was a tremendous success in an hour of need.We are now in greater need so it can only help all of us including Ruth Gledhill and her ilk.