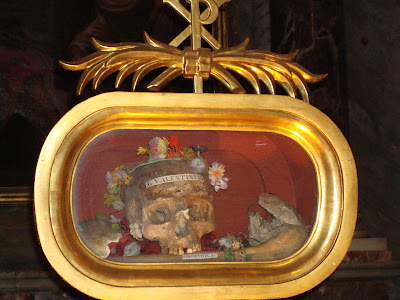 Fr Mildew has an intesting post on the relics of St Valentine, there are three St Valentines in the British Isles:

Cardinal Newman who brought the body of St Valentine back from Rome where he found it in a catacombe but had difficulties with customs. At Verona they wanted to open the box containing the relics and at the Custom House it was recorded as a "mummy". It appears they wanted to charge duty on it. It is now found in a shrine at the Birmingham Oratory. At least it is genuine.There are it seems two other "bodies" claiming the name of Valentine enshrined. One is in the Carmelite Church in Dublin sent as a gift from Pope Gregory 16th in 1835 while a trip to Glasgow and a visit to the Church of Blessed Duns Scotus you will discover Valentine No 3 this time the gift of a French family in 1868.

I was of the understanding that the St. Valentine who became associated with romance in the medieval period was the martyr whose relics now reside in Whitefriar Carmelite Church in Dublin and that the Birmingham Oratory's St. Valentine was a different martyr altogether.

At the core of the stories about St Valentine - and there probably was only one whose relics may be in different places - is that he was a priest who was martyred for officiating at weddings when Emperor Claudius II forbade them. I think that the Church might do no harm if it placed St Valentine once again on the universal liturgical calendar. We need to emphasise the sacrament of matrimony. I cannot think of a beter witness to this and to genuine love - laying down his life for married couples - than St Valentine. http://bangortobobbio.blogspot.com/2009/02/saint-valentines-day.html