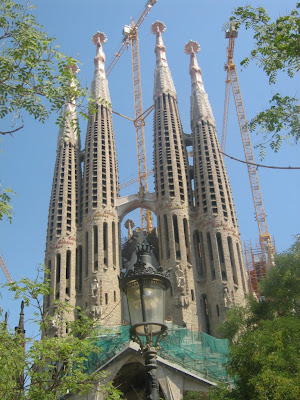 A friend of mine's mother visited the Sagreda Familia, she is ill at the moment, so say a prayer, and the carvings of the Rosary were an important moment in her conversion, for myself, I wasn't quite so moved. The interior is a building site. I am not mean but I rather resented paying 11 euros to get in plus a further 2.50 to get up onto the roof. I must admit I do dislike Gaudi's work, as holy as he was.
But Barcelona was fun, I was a little anxious about being attacked by that anarchist woman who used to bite out the throats of priest in the civil war. Some of the church's still bear the traces of the desolation of civil war. Unlike the rest of the Iberian peninsula, I didn't see a single priest or nun on the streets. On May Day there were a few small demonstrations carrying red and black balloons. I'll put some more pictures up later. 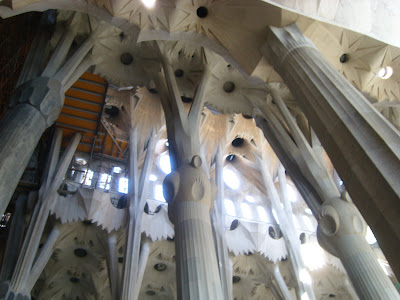 Did you go to Montserrat Fr Ray?

I agree, Father, a bit of a rip off. I took consolation that my 11 euros were helping to build the cathedral.

Hope you had a lovely restful break.

I agree Gaudis work is awful reminds me to much of modern art.

Well, I've never laid eyes on that particular cathedral before. But I must say, I didn't have to search my memory banks too hard before I thought of this. [C'mon, now you have to admit...just imagine it to be green and make you eyes go fuzzy a bit....]

Ah! I suspect that you are a Chelsea supporter, and went over for the big match.

Shame! Don't you know that your new boss supports Liverpool?

Curious that you didn't see any priests or nuns while in Barcelona. I've been there a few times and that was never my experience, especially with regard to nuns. Perhaps they were all visiting Brighton.

I have to agree with you on the subject of Gaudí. The Sagrada Familia always reminds me of an elaborate sand castle, studded with sea shells etc.

Incidentally, La Sagrada Familia is not a cathedral (Barcelona already has one of those) but a basilica. Or at least it will be whenever it's finished,