Archbishop of Westminster: A guide to the ceremony 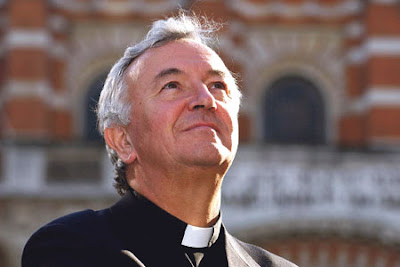 The Liturgy of the Word:
- First reading: Acts 22:3-16, read by Chris Nichols, sister-in-law of the Archbishop
- Responsorial psalm
- Second reading: Philippians 2:1-11, read by Jennifer Davies, secretary to the Archbishop of Birmingham
- Gospel acclamation
- The Gospel: Luke 10:1-9, read by Deacon Vincent Malone
- The archbishop proceeds to the pulpit to preach the homily
- The Creed is sung by choir and congregation
- The General Intercessions are read by Pamela Singh, member of the diocesan education commission, Edmund Adamus, director of pastoral affairs, Bwalya Kangwa, member of the pastoral board, Mark Nash, of the agency for evangelisation, and Helen O'Brien, director of St Joseph's Pastoral Centre

The Liturgy of the Eucharist:
- The prayer of the gifts
- The preface: "Father, all-powerful and ever-living God"
- The Eucharistic Prayer: "We come to you, Father, with praise and thanksgiving"
- The Communion Rite
- The sign of peace
- The motet, Ave Verum Corpus (Colin Mawby)
- The Communion Hymn, "Soul of My Saviour"
- Communion
- The Postcommunion
- The Hymn of Thanksgiving
- The Apostolic Nuncio, followed by Cardinal Cormac Murphy-O'Connor, addresses the congregation
- Concluding rite
- The hymn "Praise to the Holiest in the Height"
- Archbishop and concelebrating clergy proceed out of the Cathedral

Organ music at the end of Mass:
- Marche Pontificale from Symphonie No 1 Op 13 (Charles-Marie Widor)
Prelude and Fugue in C (J S Bach)

from Catholic Herald site which will be updated during the day
at May 21, 2009

Nice photo - he looks at home.

Head in the Clouds!

I listened to the homily at the installation Mass for Archbishop Dolan of New York a few weeks ago and the latter half of Archbishop Nichols homily/sermon. There is no comparison. Archbishop Dolan means business and warned the establishment that when you attack the unborn the Catholic Churh is like Mother Bear with her bear cubs in peril. Asking for a civil hearing for catholic teaching is rather low key. We continue to be the dog with the tail between its legs - too scared to say anything that mught upset someone. Reinvigorating church leadership was inevitable a dead sheep could have done it!

I watched the BBC coverage; they occasionally panned through the crowd pointing out moderately well-known people. But two things stood out:

1) there was no mention of anyone representing the Queen; and

2) there was no mention of, or sight of, the Blairs being present.

Both interesting, for different reasons.