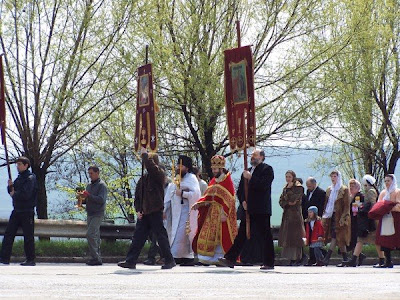 I was chatting to a man yesterday who began seriously thinking about becoming a Catholic after watching the funeral of Pope John Paul II. I remember as a child seeing television footage of the opening of the Vatican II and the funeral of Pope John, it was the first time I became aware of the Catholic Church. For him, for me, even as a child, these events spoke of the universality of the Catholic Church.
I am fascinated by how evangelisation takes place. Bede seems to indicate that one of significant events in the evangelising of the people of Kent was Augustine’s procession of singing monks from Ebbsfleet to what is now called Canterbury, carrying the icon of Christ on high. The story of the conversion of Russia, the ambassadors witnessing the liturgy at ‘Agia Sophia, “not knowing whether we on earth in heaven” has parallels. The early Jesuits used boats travelling up the Amazon filled with oboes flutes and violins with a picture of Christ or the Mother of God fixed in the prow to excite wonder in the Amerindians. In the Gospel of John Jesus “awakens faith” in the Jews by signs and wonders, he works a miracle and they are amazed, and their amazement leads to a desire to listen.
A few years ago I had some correspondence with someone who had given a sizeable donation to equip a floating chapel which sailed down the Dnieper stopping of at settlement for a few days or so, they had a procession, gave two or three talks on the faith, celebrated the liturgy baptising, confessing and communicating those who wanted the sacraments, gave a few icons and pamphlets and moved on, returning possibly the following year or even later. The Orthodox would perhaps explain it as Evangelisation by Theophany. It seems to be more or less the model adopted by St Francis Xavier or those recusant priests of penal times. It seems to have been what the Wesleys did, leaving people with a few songs rather than a medal or two.
Nowadays the process of initiation is really supposed to take three years following the cycle of readings from the Lectionary, often this shortened to a mere year. It is supposed to be accompanied by the various Rites of Christian Initiation, Exorcisms, Giving of the Creed, Inscribing of the Names of the Catechumens, Anointings and Scrutinies. I am tempted to follow this liturgical path but then I think of the Ethiopian, who met Philip who explained Isaiah to him baptised him and left.
at May 28, 2009

Don't forget the nun who smiled at you. :-D Let me know when you need an amanuensis. [Why on earth is the RCIA process so jacked around? They couldn't leave well enough alone before?]

Let's do it in Brighton!

Can't do any harm...as far as I know, 9/10ths of the choir are unemployed anyway.

I often why it was that lots were drawn to choose Matthias and Barnabas but today it takes seven years. And that's if you get through the selection process.

Do the red, read the black and leave the rest to the Lord.

I came into the church because someone did just that.