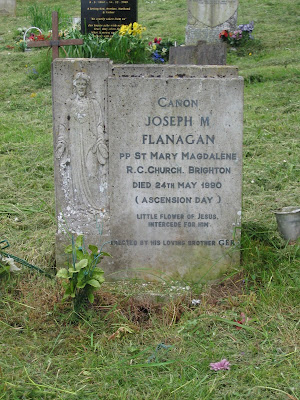 Say a prayer for one of my predecessors "Fr Joe", Canon Joseph Flanagan, it is his anniversary today. He was much loved and still remembered here.
He would plod about the parish and invite peole he met in the street to become Catholics, saying things like, "Ah sure, it is a terrible, sour protestant face you have on you, why don't you think about becoming a Catholic?" It worked, he had converts by the score.
A few days ago a couple of parishioners went to the cemetry to tidy and pray by his grave. Several parishioners loved in him so much they left it in their wills that they should be burried as close to him as possible.
I remember him a little, he was a priest who was capable of showing his humanity.
at May 24, 2009

Thank you, Father, for drawing attention to the craaaazy Irish way of doing things - the part we can be proud of, the part where we're able to laugh at ourselves:-D

Sometimes people just need a gently nudge from the right person at the right time in order to do things or make changes that, either consciously or subconsciously have been going through their minds for a while. Didn't something like that happen to a rather disagreeable tentmaker?

Monsignor Wallace was the best loved in our family because he gave us our first house No 8 Spring St.Father Joe rounded us up when we were on the missing list,he was always visiting and talking to strangers and getting them seeing the light.

We have always been lucky at St.Mary Mags.And the present incumbent is also exceptional and a worthy successor.

Our Patron Saint would be happy.

A "terrible sour Protestant face" - I've seen more than my fair share of those. (Along with a few sour Catholic faces, I must admit with chagrin...)

Sometimes we forget that there is reason to be filled with GREAT joy as Christians. Fr. Flanagan apparently radiated that joy.

With the unrelenting anti-Catholicism from the media, the sexual abuse scandals and the infighting between those Catholics who are faithful to the Magisterium and those not faithful which spill onto the public arena, I don't see much to be joyful about. I came to the conclusion one night last week after reading about yet another scandal this time a priest going off the rails in Florida that I don't much like being a Catholic. I will remain a Catholic because I believe it is the Church which Christ founded but I am rather joyless at the moment.

We are into Genealogy.

Kala is feeling joyless because "they" have got to her,if she had read some of the anti Catholic propaganda of tha 19th C she would be even more joyless.

So-called survivors of this abuse have made a lot of money,they write books,appear on TV and talk to anybody who wants to listen to them.

Nobody is allowed to question their evidence for fear of being labelled a "denier".A lot of the more salacious stuff can be taken with a pinch of salt.

I had 4 years being taught by Presentation Brothers and would defend them to the death and so would the majority who were taught by them.

Most of these institutions are virtually run by bully-boy inmates and anything they said to frighten "new boys" was taken as Gospel.

The variation on this conversation I recall was

"Are you a Catholic?"
"Why?"
"You've got a Catholic face"
"I'm not"
"Funny, I thought you were. Why don't you think about becoming a Catholic?"

I was fortunate in that my life and his intersected, in albeit a small way. He was one of the good guys, no mistake about that.

Apparently, American tourists used to turn up at the Presbytery and ask "You still got that big Irish priest?" and when the answer was "Yes" they used to say "What time's he on?"

Fr Joe was a wonderful man, deeply authentic. When I was a teenager, I often asked him to bless crosses which I gave to my friends. I would just turn up at the presbytery,(of course I had to first overcome the formidable vetting procedure of the housekeeper!) Father Joe would always be delighted to oblige. I was not Catholic, but he seemed unconcerned about this. I asked Father Joe rather than any other clergyman that I knew, because he was a genuine old school Catholic priest. Despite the horrific thuggish defamatory assault of the modern mainstream media on The Catholic Church, a good Catholic priest cannot be surpassed. I say this as a practising Buddhist.