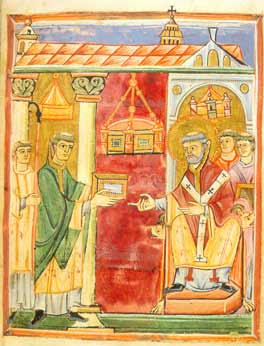 Today is the feast of St Augustine of Canterbury.
We really know little about him. He is portrayed as converting England to Christianity, he did some of that but his important role was bringing England into communion with Rome, mainstream Christianity. England already contact with Christianity, especially in the west and the north through the Celtic Church.
It is easy for us to forget being a Catholic in communion with Peter is mainstream Christianity. Not only is that evident through sheer dint of numbers, a billion plus Catholics in communion with Peter. It is also pretty obvious from the texts of the Gospels that Peter is the Rock on which the wisest of men Christ built his Church, which would withstand the buffeting of storm and even the Power of Hell until the end of time. It is also obvious from the history of the Church that the centre of communion is the person of the Bishop of Rome.
Any contact with Christ is a good, Augustine knew that there was something better than the mere "good". The "best" for Augustine was communion with Peter, mainstream Christianity.
at May 27, 2009

Archbishop Worlock used to celebrate an annual Papal Award Holders' Mass in Liverpool cathedral. The recessional hymn was invariably Canon Francis Ripley's version of "God bless the Pope" (sung to the tune of ‘Full in the panting heart of Rome’).

To England’s shore Augustine came
To teach the Faith in Jesus’ name
And faithful soon were proud to sing
This prayer for the Vicar of Christ the King:
“God bless our Pope, with faith and love”

An isle of saints England became
And Mary’s Dowry her fair name,
As faith and virtue grew in twain
While minds and hearts ne’er ceased proclaim:
“God bless our Pope, with faith and love”

So now when God is set aside
And evil flows in stronger tide
We need the faith of days of yore
To sing with fervour ever more:
“God bless our Pope, with faith and love”

Father, please don't fall for that old Anglican fallacy that the Celtic Church was 'Catholic but not Roman'. There was never any question that the Celtic Church of Columba, Aidan et al was not in communion with Rome: they just celebrated Easter on a different date and had some other different customs, all sorted out at Whitby. Augustine and others sought to bring these customs into conformity with Rome. At Whitby, the clinching argument for the date of Easter was precisely that Rome was the see of Peter, prince of the Apostles, and the Celts agreed that this was conclusive. they had never thought of themselves as independent in that way. Were we to think that the Celtic Church was somehow independent, then you would find it hard to explain why all the churches that the Celtic monks founded across Europe very explicitly and always (e.g. St Columbanus) referred important questions to Rome and saw it as the fons unitatis.

Thank you xiucai, I had almost forgotten Ripley's version.

P in V, You are quite right, it is a fallacy. 'Catholic but not Roman' would be incomprensible in the first millenium.

To bad we lost the original English dioceses. Like Canterbury, York, Salisbury, etcc. Hopefully some day they will return!.

"Catholic but not Roman"... the East? The Middle East? Africa? There were five Patriarchal Sees in the First Millenium, not one, and even the accepted "Ecumenical" Councils did not take place in Rome but elsewhere... IF being in communion with Rome is the test of Catholicity - what say you to the ancient Patriarchates of the East, Africa and the Middle East? That they are not Catholic?

Becket, Salisbury is not an "original" diocese - it is post Norman Conquest.

The Saxon diocese was Sherborne, until the cathedral was moved to (old) Salisbury.

I think originally it was all under Winchester.

I'm talking Catholic dioceses before the reformation. Salisbury was one of them.