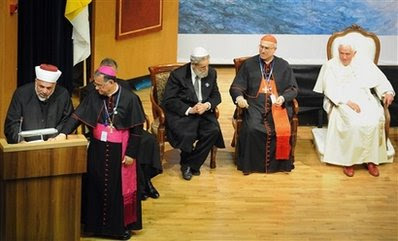 The Holy Father walked out of a meeting today in Jerusalem after Chief Islamic Judge of the Palestinian Authority, Sheikh Tayseer Rajab Tamimi, launched a viscious verbal attack at Israel. There is fascinating comment on American Papist.

I was there, In ND of Jerusalem. It was very evident how Msgr. George got nervous when Tamimi stood up and approached the microphone... He initiated sayin to the Pope: "Welcome to Jerusalem, capital of Palestine"... so you can imagine the rest of the speech. His tone was very strong, not very friendly. At some point some people (I guess the arabic speakers) started to clap hands supporting him. The Pope's "nunzio", ambassador, in Israel, when directly to the podium to ask Tamimi to end his speech. He ended and walked in front of the Pope and gave him a very distant hand greeting. After that, the Pope left the place, and in the way he stopped to say something and goodbye to Tamimi.

What do you expect? Tamini was merely following in the footsteps of Al-Husseini, the Grand Mufti of Jerusalem. He was not content with verbal attacks on Jews, spent the war in Berlin, recruited for the Waffen SS, and visited Auschwitz. In 1948 his irregular forces attacked the Jewish areas which declared the State of Israel. To this day he is regarded as a hero in the Middle East. Hamas looks back to him, as indeed did the late Arafat. Tamini is indeed giving voice to a tradition.

The Holy Father exhibited his usual good sense by walking out, and as one would expect did so very politely.

Wow. That's the equivalent of diplomatic ashtray throwing. I won't be happy until he gets back to the Vatican.

Fr Ray: Whispers in the Loggia provides a different account of what happened at this rather embarrassing event; one in which His Holiness did not walk out. This is confirmed by Reuters which reports:

"Addressing the pope at the end of a six-minute address, he said: 'Your Holiness, I call on you in the name of the one God, to condemn these crimes and press the Israeli government to halt its aggression against the Palestinian people.'

Tamimi shook the pope's hand as he left the podium and the meeting broke up as scheduled immediately afterwards."

Rumours are flying and it would be wise to avoid being sucked into drama.

The Holy Father, like anyone who tries to be even handed in this tangled business, is in a no win situation. And there are those waiting on the sidelines, analysing his every word and gesture, waiting to pounce.

It would seem the pro-Zionist press is portraying this as Pope Benedict walking out of the meeting, when he was scheduled to leave the conference room after Tamini's speech.

What language was Tamini speaking in? I wonder if His Holiness even knew what he was saying at the time.