Pope on Damascene and images 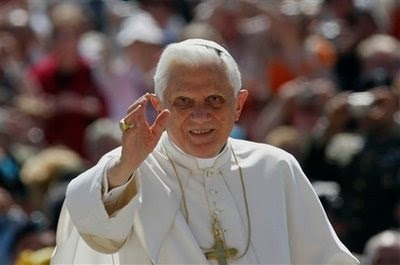 (CNA).- Days before he heads to the Holy Land, Pope Benedict taught the crowd of 20,000 at his weekly General Audience about the reason that Christians venerate images. Drawing from St. John Damascene, he explained the theology behind the use of material objects and the difference between adoration and veneration.

In recalling the figure of seventh century St. John Damascene, who is of “primary importance” in the history of the church, the Pope focused on his “three discourses on sacred images against those who sought to slander them.”

The Holy Father explained that in these three works, the “first attempts to legitimize the veneration of sacred images” can be found. St. John Damascene accomplished this by associating images with the mystery of the Incarnation of the Son of God in the bosom of the Virgin Mary.

Another contribution of St. John was his distinction, in both private and public Christian devotions, between adoration and veneration. “The former being highly spiritual can only be directed towards God, the latter can employ images to seek intercession with the images’ subject,” said Benedict.

As he prepares to head to a predominantly Muslim country on Friday and later to Israel, the Pope reflected on the difference between Christian teaching on images and that of the other two monotheistic faiths.

"It immediately became clear that this distinction was important in order to provide a Christian response to people who insisted that the severe Old Testament ban against the liturgical use of images was universal and perennial. This was a also a subject of great discussion in the Muslim world, which accepts this Hebrew tradition of the complete exclusion of all images from worship. In this context Christians, for their part, discussed the problem and found the justification for the veneration of images."

John Damascene, he noted, gave us the theology of the material, which is a prominent feature in Eastern Christianity.

Elaborating on this idea, Pope Benedict explained, “God has made himself material for me; I venerate the material through which His salvation came to me.”

“Is the wood of the cross not material and the ink with which the Book of Salvation was written, and before all other things, the blood and flesh of my Lord?” he continued. “I do not venerate material, he would say, but the creator of the material.”

“We must allow ourselves to be filled with wonder before the works of Providence, overcoming the temptation to see aspects which seem unjust,” Pope Benedict added. “Christian optimism is not naive, it is aware of the wounds inflicted by human freedom and all the consequent disorder derived from it.”

“The path to the sea of God’s love needed to be concretely indicated to mankind,” the Holy Father concluded. “Thus the Son came down to his servants; he lowered the heavens in coming among us, fulfilling the newest of all things, the only truly new thing.”
at May 07, 2009

Thank you for that, it is a great help in explaining it to others.

It's ironical that, were it not for the Islamic invasions of the Byzantine Empire, John Damascene could never have taught with such freedom: being in occupied Syria, the Emperor could not coerce him to the iconoclast position.