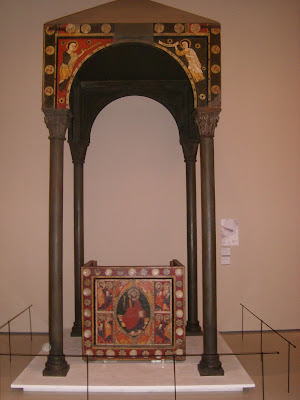 I found this altar with its ciborium in a museum in Barcelona -more on that later- it dates from c1175. What sruck me as being interesting is that it is so high, I am over 6ft and I think it would come up to my elbows, about 4ft high. As we know, everyone before the 20th Century was a midget which presumably means that for many priests in the past it was at the level of the chest or chin. Presumably, its height reflects the time before that new fangled elevation business had been widely adopted and presumably during the canon of the Mass the priest would have stood before the altar without a Missal -unless it was almost vertical- and recited most of the prayers by heart.
Anyone with greater knowledge or imagine than me like to comment.
There were other painted frontals which would suggest this altar is not exceptional.
Anyone know when the fabric frontal came in?
at May 03, 2009

See "The Mass of St Giles" by the Master of St Giles in the National Gallery, London which shows the high altar of St Denis, Paris as it appeared c1500. The antependium of gilded bronze dating from the 9th century has been re-ordered as a retable and a fabric frontal substituted. There are also gilded bronze antependia of similar date, one from the cathedral of Basel in the Musee Cluny in Paris. Also in the National Gallery is a rectangular altarpiece attributed to Margarito of Arezzo which may well have started life as a painted altar frontal or antependium. For what it's worth I dont think it is so much a question of fabric frontals coming in as sculpted or painted antependia being given a visually more prominent role as "backdrop" to the elevation of the sacred host and chalice in the thirteenth century. It was around this date that the retable or reredos came to play a more significant role. About the same time the use of curtains to veil the altar during the Eucharistic Prayer ceased although one can still see the rails from which these once hung in some of the Roman Basilicas.In short I believe the fabric frontal a consequence of 13th century liturgical reform/development. The Elevations in the Mass are, in my view, the source of the great outpouring of art known as the Renaissance. I comment in haste but hope this is helpful.

‘As we know, everyone before the 20th Century was a midget’

Well not quite Father. While the liturgical aspects of the altar are fascinating I shall provide some info on height from archaeological excavations.

In the Roman period in Britain (skeletal remains at Cirencester) people were on average slightly shorter than today with men around 1.69m and women around 1.57m.

A recent study of skeletal remains in northern Europe shows the average heights fell from 5’67 (173.4) in the early Middle Ages to a low of roughly 5’47 (1.67m) during the seventeenth and eighteenth centuries. Taking the data at face value, this decline of approximately 6.4 centimetres substantially exceeds any prolonged downturns found during industrialization in several countries that have been studied. Significantly, recovery to levels achieved in the early Middle Ages was not attained until the early twentieth century. There could be a number of causes, of which climate change and deteriorating social conditions in the post-medieval period would be prime causes (Steckel, R. H. 2004. New Light on the "Dark Ages": The Remarkably Tall Stature of Northern European Men during the Medieval Era. Social Science History, Vol28, Number 2. Special Issue: Recent Research in Anthropometric History).

Average height today is around 5’9 (1.79m) so only about 2 inches different on average.

It is very beautiful and a cubic structure with ciborium much to be preferred over the 'wedding cake' and 'sideboard' type of altar IMHO.

The photograph reminds me of the (less fine) altar and ciborium in the Greek Cathedral of All Saints, Pratt Street in Camden.

Arnaud: Fascinating data. I'd not heard that before. But it is still a curious question as to how an altar of that height could have been "comfortable" for a much taller man to celebrate Mass at.

[Yes, I know not to end a sentence in a preposition but it's too early for me to think of a circumlocution.]

The huge vesting bench in our church was recently raised on rollers 2.5 inches when our sacristy was remodeled. and that inch and a half makes a huge difference.

I have to think one must think of where that altar was originally placed. The fact that it has a baldacchino leads me to think it was a free standing altar, in a basilica. Is it possible this was in one of those churches where the celebrant did face the people AND on his side, there was a small platform behind the altar? Just a thought. The altar is more square than rectangular, which is unusual in itself for the time - perhaps that's why it is so high?

Oh, wait. Now that I've enlarged your pic, it seems the SIDES and front are higher than the rest of the altar, I bet from BEHIND the altar is where the priest stood. In one of those instances of facing the people. [Rare, but in some places it happened.] I bet the altar height is more "normal" on that side.

As for the antependium, it seems to me a while back one of the blogger priests had quite an extensive article on antependiums.

OR, that altar is in a bascilica AND the "frontal" is pointed to the back of the church, where all the "important people" are so they get to see it!

gemoftheocea - quite correct in your former speculation. In spain, it was custommary to say mass facing the congregation (and the chair of the celebrant would have been at the end of the nave even for a simple priest as it was in basilicas and cathedrals elsewhere.) Now, this is less evident as the centuries moved on and the Spanish rite (aka Mozarabic, Visigothic, Isidorian, or Hispano-gothic rite)was replaced with the Roman Rite and eventually the Tridentine Form. If you want to see an altar frontal of this form in a contemporary depiction, I recommend the "Liber Testamentorum" of Oviedo Cathedral where a red frontal with an Asturian/Visigothic Cross and stars embroidered or painted on it. There probably was a step behind the altar. In the Cathedral Treasure of that said Cathedral is an ark, used as an altar whose front-side is a silver-gilt representation of christ in majesty with the 12 apostles from the 12c.