Pope and the King baptism trip 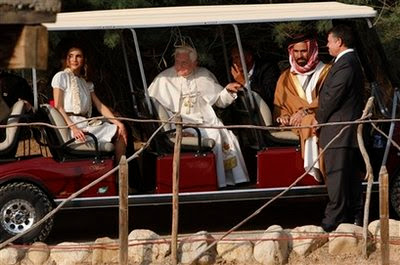 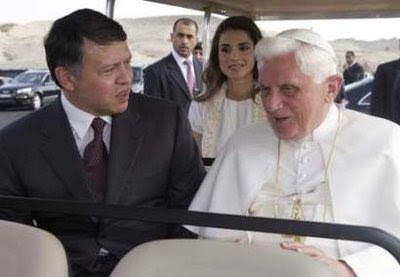 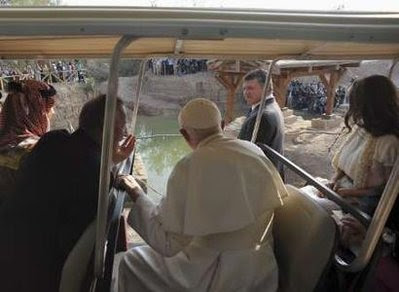 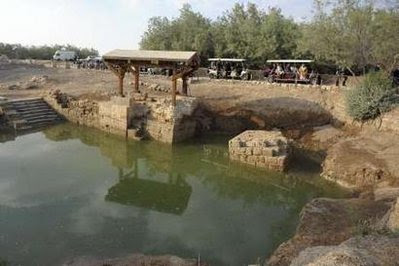 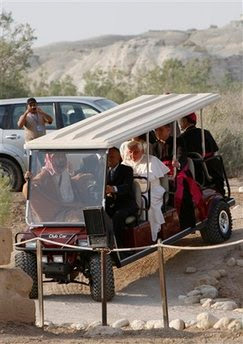 Benedict XVI was unexpectedly joined today along the banks of the Jordan River by Jordan's King Abdullah II.
The Pope, on day two of his weeklong pilgrimage to the Holy Land, visited the site of Christ's baptism at Bethany beyond the Jordan.
Though not part of the original program, he was accompanied in a private motorcade of elongated golf carts by King Abdullah and Queen Rania. The king, seated beside the Pontiff, explained to his guest the archeological excavations being carried out in the area. The exploration is being overseen by a Jordanian commission.
Archeologists have found more than 20 churches, grottos and baptismal fonts in the area, showing that the site was a popular pilgrimage spot in early Christianity.
Nowadays it is much-neglected, only open a few times a year. But the area is scheduled to undergo considerable growth: King Abdullah is planning to build five Christian churches near the historical site some refer to as the birth of Christianity. And one of the expected consequences of the Holy Father's visit to the location is that pilgrims will rediscover its significance.
After visiting the baptismal site, the small party continued on to a public venue where the Pope was greeted by several thousand faithful. The Pontiff blessed what will be the cornerstones of the two Catholic churches to be built next to the historic river, one Latin and one Greek-Melkite.
"It is with great spiritual joy that I come to bless the foundation stones of the two Catholic Churches to be built beside the river Jordan, a place marked by many memorable events in biblical history," the Holy Father explained.
"The foundation stone of a church is a symbol of Christ," he continued. "The Church rests on Christ, is sustained by him and cannot be separated from him. He is the one foundation of every Christian community, the living stone, rejected by the builders but chosen and precious in God's sight as a cornerstone. With him, we too are living stones built into a spiritual house, a dwelling place for God."
"Let us rejoice," said the Pope, "in the knowledge that the two buildings, one Latin, the other Greek-Melkite, will serve to build up, each according to the traditions of its own community, the one family of God."
Prelates in attendance included Gregorios III Laham, patriarch of Antioch for the Greek Melkite Church, Archbishop Fouad Twal, Latin patriarch of Jerusalem, retired Patriarch Michel Sabbah, Archbishop Joseph Jules Zerey and Bishop Salim Sayegh.

There was some interesting music at yesterday's Papal Mass in the Amman stadium. Also a beautiful 'Panis Angelicus' with small orchestra. (On kto at 1 hr 52)

2nd Photo:
Pope: May I recommend Baptism to you?
King: What's that?