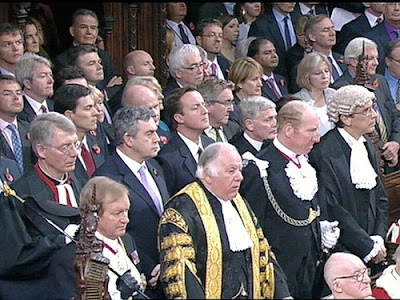 It would be good to think that the corruption, sleaze and downright dishonesty that is freely oozing out of the Mother of Parliaments is a result of contemporary secularism but that is not true, European Christian Democrats could not only give our MPs and Peers a run for their money but win hands down.

What I do find worrying, and is perhaps derived from secularism, is the constant refrain of "it was within the rules". It is as if rights and obligations spring from the rule book rather than from another authority. Christianity, of course, talks about a morality that springs from something above and beyond the rule book. For a Christian, right and wrong come from God, and is written in the very nature of mankind, it might well be that original sin obscures man's ability to discern right or wrong but right and wrong are objective realities.

The problems our Parliamentarians face are the same as strike at the heart of British society as a whole: too much trust in the rule book and no trust in our own ability to make right decisions. Again and again from abortion to minding the gap on railway trains and other health and safety legislation the state feels obliged to step in and remind us not only of the rules but reinforces the ultra-pessimistic view of human nature. Today the lives of every British citizen is dominated by petty legislation. His moral imagination is stunted and he relies continually on the state not only to govern his behaviour but even his thinking. The state invades and hopes to remake his thinking about such basic concepts of family structures, human sexuality, even the beginnings and end of life. Right and wrong are imposed. The knock on effects are that we lose our imagination to do good in society. It makes us assume that the state, rather than us, are responsible for the care of the marginalised, of the elderly, the socially marginalised, the poor.

The alternative is of course equally frightening, there is an American blogger at the moment, recently married whose wife had a difficult pregnancy, the hospital bills threaten to reduce him to penury.
at May 19, 2009

Most of us have always taken it for granted that our Politicians are only in it for their own good,why it is so surprising that they take full advantage of the rules is another one of those mysteries.

The biggest crooks are the "Garbage Press" who are out to destroy peoples lives,a bit of fiddling within the rules does no harm but those in positions of trust who are not doing their jobs like Local Authorities,the Utilities,Hospitals,Schools and the Police.

They are the ones who should be pilloried,castigating silly politicians does no good at all and just takes our minds off what is really going on.

We are being unduly influenced by evil single issue pressure groups.so-called Greens,Vegetarians,Non-Smokers and other assorted nuts.There is another HITLER waiting in the wings and we are blindly accepting it.

The only solution to this is the supernatural life of grace, the sacraments and prayer. Sooner or later a Catholic churchman is going to have to say this publicly and boldly and be prepared to have his head bitten off for saying it. May that day come sooner rather than later.

"a bit of fiddling within the rules does no harm". Really I always thought that honesty was indivisible.

More and more the truth is before our eyes;If we stand for nothing,then we fall for everything.D.Aidan O.S.B.

How apt is the phrase; 'to stand for nothing eventually leads to falling for everything,'

I agree with nickbris about the press. Many of these journalists who are pounding MPs for avoiding a few thousand pounds of tax (of which I personally disapprove) are working for proprietors who are avoiding tax in the millions.

I'm quite angry about this Michael Martin business as I reckon, although not blameless, he has been the fall guy here. Certain sections of the Commons have been out to get him since day one because of his background and, dare I say it, religion. The Daily Mail which has been chorus leader in this loathsome campaign since his appointment sums up the sickening snobbery of Quentin Letts, Paul Dacre et al and comes out in its true colours with its headline today: 'ARISE, LORD GORBALS' .

Parliament is omnicompetent, it makes laws which affect the lives of all of us even newspaper proprietors and which penalise those who do not accept the increasingly secular ideology behind them. It is therefore important that its members should be honest and the press, whatever its motives does a good service in exposing those members who are dishonest and even criminal. Should not a Minister of Justice who fails to pay his Council Tax, is fined and then charges the fine to MPs expenses be exposed?

As for the Speaker, I doubt if most people know of his religion or that of Duncan Smith, but do know of his bumbling incapacity, his ignorance of procedure, and his defence of secrecy regarding MPs slush funds.

Some of us, of social origins quite as humble as those of Mr Martin, do not chooses to make our origins an excuse for our failings. People should be judged not on their origins but on what they have done since. Compare him with the former Tiller Girl the admirable Betty Boothroyd.

Mr Martin, although proud of his origins, does not use them as an excuse for his failings.

As for his religious affiliations, I am surprised that anyone who has an interest in the news would be unaware of them. Over the past ten days or so a frequent addendum to his name has been "the first Roman Catholic Speaker since the Reformation".

He is also that rarity in politics these days - a true pro-lifer. And by that I do not mean just anti-abortion.

What a 'right honourable shower' of a parliament. I can just hear those immortal words from the old Laurel & Hardy films, "Well, that's ANOTHER fine mess you've got us into".

Fire the lot of 'em! Useless.

It is noteworthy that the newspapers most concerned with the dishonesty of our MPs were almost all the quality press (Times, Guardian, Independent, Telegraph)not the gutter press. The rest concentrated on the doings of "celebrities" and partially clothed ladies. The Telegraph rather ironically in view of its former traditionalist catholic proprietor and supporter of anti-abortion causes who is now in gaol for offences akin to those of the MPs,led the crusade for transparency and honesty in the use of public money by our legislators.

The ten commandments not the rules should have been their guide, especially as they alone can make laws.

It would seem that I'm not alone in my views. His Grace, the Archbishop of Glasgow concurs: http://www.theherald.co.uk/features/letters/display.var.2509157.0.scapegoat_for_a_rotten_system_or_complicit_in_its_excesses.php

Witnessing the unseemly and undignified attacks on Michael Martin, the Speaker of the House of Commons, brought to my mind the scene of an assembly of unruly pupils seeking to humiliate their headmaster for misdemeanours they themselves had perpetrated. The parliamentary culture of greed, selfishness and secrecy, which has been exposed by the press, is shameful. So far, few parliamentarians have emerged with flying colours from the mounds of extraordinary expense claims and "within-the-rules" excuses.

To compound the sense of public distress, we have now witnessed some MPs shifting the spotlight away from their own misconduct by hounding the Speaker from office. And this despite the fact that Mr Martin inherited the woefully inadequate system, and himself proposed changes which would have gone some way to cleaning up the culture, only for his fellow MPs to reject them.

In the years I have been Archbishop of Glasgow, I have found Michael Martin to be a popular public servant, one whose respect, and indeed love, for parliament and its traditions have been second to none. The dignity with which he has represented parliament in this city and elsewhere has brought pride to many people, especially his own constituents, many of whom come from less-than-privileged backgrounds, but for whom (despite the pageantry and pomp of his high office) he has remained always an approachable and helpful advocate and friend.

To have seen the Speaker and his family treated with such scant respect does nothing to restore faith in politics. In attempting to find a scapegoat to excuse their own shortcomings, some parliamentarians have demeaned their office still further, and caused, in my opinion, irreparable harm to parliament itself. The public will not be so easily deceived.

I take it that the Archbishop approves of the Speaker's own expenses of questionable nature ,and also his use of public money to go to law to prevent the culture of "greed, selfish and secrecy" being revealed to the general public. Mr Martin spent thousands pf pounds on a lawsuit, paid for by the general taxpayer, to try to prevent the Freeddom of Information Act being appled to MPs. They are almost all to blame especially those who tried unsuccessfully to limit the operation of the Freedom of Information Act by legislation, and he was their leader. The MPs who called for a vote of confidence were not seeking to conceal their own misconduct,indeed none of them have appeared in the columns of the Daily Telegraph reports on expenses. It is noteworthy too that the Speaker seemed unable to cope with the procedural problem and had to ask the Clerk of the House.

To criticise him is not to be anti-Catholic, anti-Scottish,or anti-working class, indeed doubtful expenses seem to be common to Jews(Kaufman), Moslems(Malik), Catholics (Kelly), etc, and to those of all national and class origins. It is a truly ecumenical phenomenen.

One can respect religious and national solidarity and loyalty to old friends, but it should not be indulged at the cost of truth. The mess would never have happened under Speakers Thomas and Boothroyd, both Labour, both of humble origin.

As Fr Blake put it the whole question, not just the Speaker,is one of right and wrong.

Thank you Crux Fidelis, it has been a pleasure to cross sword with you, I intend to say no more.

IP say's nobody who called called for a vote of confidence was involved with the "fiddling" What about that Clown Clegg? he claimed for dodgy phonecalls to foreign parts and then said SORRY and paid it back.

Everybody who gets Nicked is SORRY and would gladly pay back to avoid a conviction,the prisons are chock-a-block with SORRY shoplifters and benefit fraudsters.