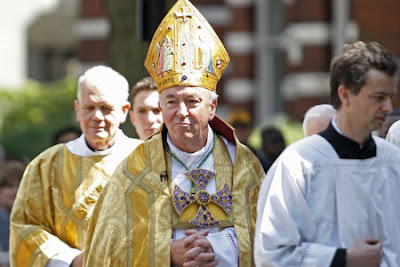 (AP Photo/Sang Tan)
I watched the liturgy of the Installation (though Canons have stalls Archbishops have thrones) on Television. I was impressed, the overall impression was one of prayer. The music was quite splendid, I loved the new pieces by James McMillan and Colin Mawby. The use of the High Altar worked well, as did the use of the Ambo. Visually and audibly in was very rich, it was obvious that a great deal of care had been put into the liturgy, even some of the ancient treasures were brought out like huge cope morse - whose was it?
The only blip was those wretched tea-trays used by the servers to bring the Most Holy, from somewhere, to the clergy, that was horrible!
The sermon wasn't full of fireworks like Archbishop Dolan's in New York, the English Church is different, it was reasoned and challenging, it left one remembering the Liturgy, which is most important.
I was left with the impression that the Archbishop was stating a commitment to the Benedictine reforms, that the Catholic Church is capable of producing a national "spectacle", of producing and commissioning new works of art, it showed the Church as being alive.
It is perhaps unfair to compare todays event with the installation of Cardinal Murphy O'Connor but the two events demonstrate how much our liturgical understanding has moved on in the last few years (except for the tea trays).
at May 21, 2009

You are so right on the tea trays. Do you think this should become a matter of concern for the new man in Westminster? Maybe we could start a facebook group...

I noticed the tea trays too. (And cringed.)Not something you could have foreseen, really.

So that WAS a morse! I thought it a bit too OTT for a pectoral cross. And wasn't it wonderful to see the real altar used!

They use tea trays at Worth Abbey too and the vessels are not always made of precious metal!

Yes, tea trays! Gack! What were they thinking?

Why is it so many clergy these days do not join their hands properly (palms flat together, right thumb over left, fingers pointing upwards)? It's bad enough when altar servers clasp their hands in that slovenly manner but to see an archbishop do it! The late Fr Thomas O'Connor who tutored me and many others in serving the liturgy must be spinning in his grave.

I have read the homily again. It is full of meaniingless cliches and phrases e.g. "creative conversation" and "sincere disagreements". Meaningless! It is obfuscation. Reading too much into it is too kind. There is little of content, it is froth! It is the language of a politician not a bishop.

From afar in Australia,I hope that this Archbishop will more than makeup for the insipidness of the present imcumbent of the See of canterbury