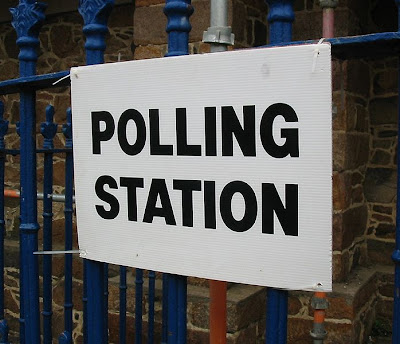 Far be it from me to tell anyone to vote for a particular party in the European elections, but ... .
Catholics should vote according to a well founded conscience, sometimes I suspect they form their conscience according to cultural political beliefs.
Real Christians are a bit rare in politics today, it seems that in the current of Westminster sleaze allegations the number of practicing Catholic MPs seems a bit higher than it should be.
We should grateful for small mercies, at least it means we are spared the spectacle we see in the Americas, in Venezuela Chavez is trying to create his own breakaway Catholic Church whilst in the US Obama is trying to isolate the Church's bishops by promoting those Catholics whose consciences are formed by the liberal values of the Democratic Party.

Far be it from me to tell anyone to vote for a particular party in the European elections, but I was interested in this ....

The Christian Peoples Alliance is unashamed to declare its commitment to the principle of respect for life. God values everyone equally and so everyone from conception (fertilisation) to natural death deserves the protection of the law. Our objective is to develop a new caring, pro-life ethic that will embrace an end to all forms of violence, whether gun crime, domestic violence, the abuse of children, the violence of abortionism and embryo experimentation, sexual exploitation of women, people trafficking, slavery or cruelty to animals.

We will be firm advocates in the Assembly of a UK repeal of the 1967 Abortion Act. Significant new support will be given to maternity units, such as resources for people-focused birth plans and new mid-wifery and nursing posts. A family-support service will be funded to ensure the provision of a 24-hour, 7-day a week helpline for women and couples who are seeking a positive alternative to abortion. We will back higher child benefits and family friendly tax policies, such as transferable allowances.

It is vital that a child's needs are placed at the heart of the adoption process. For this reason, the CPA will ensure that adoption is normally confined to the traditional family unit involving both a mother and a father.

Maybe good Catholics should consider voting for the CPA, whoever you vote for, vote Christian! Our bottom line concern should be to stop the massacre of the innocents, the killing of children in the womb.
at May 29, 2009

Hmmm. Their party political broadcast was less than compelling. But I'll certainly consider them next Thursday.

You're very lucky to be able to vote for such a party, Father. Unfortunately, in the Netherlands, not even the Christian parties are pro-life. The best option is a party which prefers to maintain the Dutch status quo of legal abortions and euthanasia, because "we can't change it anyway". And that party is unashamedly anti-Catholic to boot.

I had a postal vote and did just that. With P.R. they stand a reasonable chance if enough Christians vote for them.

Interesting indeed. I might have to reconsider my usual course of action which is to go to the polling booth (devoir oblige) and write 'Christus Vincit' in big letters across the ballot paper!

Funny, I just sent this post (not mine) to my supervisor.

"The logic of these reflections is that Catholics should join political parties on the basis of their practical proposals, try to reverse and refuse to co-operate in their immoral policies, and strive through evangelisation to place political culture on a sound intellectual basis. In the case of some parties this may be practicaly impossible as their official ideological basis may already be incompatible with the faith. They will just have to be fought. But my enemy’s enemy is not necessarily my friend."

Funny you should mention them. I had already decided they were getting my vote. Time to fight back methinks.
I had toyed with UKIP as an idea as they are the ONLY party to come out and support home educaters against the present Govt attack -but on balance I think this Christian party is a better choice.

You know, I'm racially ineligible to join the BNP, despite being blonde, blue-eyed, and having a strong "estuary Scots" accent all the way through my personality, never mind my speech. Have a wee read of their constitution.

I'm racially ineligible to join the BNP too, in spite of the fact that:

(a)my father was in the German army and spent the war on the Eastern front;

(b)my German mother and her siblings were all classified as Aryans; and

(c)her brothers served in the military save for the two not yet of age.

The BNP constitution uses terms such as 'folkish' and 'folk community'.

This is a rather inelegant way of rendering into English the German terms 'volkisch' and 'Volksgemeinschaft'.

Both terms come in context with so much Nazi baggage that you wouldn't use them in polite company.

The most succinct way of expressing their meaning is that they connote a people racially defined and organised for the supreme purpose of preserving the purity of blood and race.

Nick Griffin's father, who introduced him to far-right politics, has been a Freemason since 1947.

I didn't like the BNP's leaflets. Horrible colours and stuff about winning the Battle of Trafalgar, also it said the immigration was harming the health service. As far as I can make out the NHS would close down without immigrants. Dangerously bonkers.

What about The Jury Team?

Not only the NHS Henry. My mother is in a private Home where most of the staff come from Poland. And she has nothing but praise for them. Her only grumble one day was that the English of one of the girls was not perfect 'even though she had been there for two whole weeks!'

I have to say I was more impressed by the leaflet we got through the door from the Christian Party / Christian Poeples Alliance, than from any of the other morally and politically bankrupt lot.

They talk about A Christian Europe - that recognises that Christianity brought Europe freedom, culture and values that we must return to.

Also most importantly they propose under a heading Respect for Human Life, 'full protection of the law for all human life from conception until natural death.'

Well that ticks the box for me. None of the other parties offer these prerequisites for the sort of society I want to live in and see my children and grandchildren grow up in.

Lib, Lab and Conservatives have had it all their way all these years and look at the b....y awful mess they've got this country in to.

Religious thought and ethics should be an integral part of mainstream politics. Why keep religion on the fringe of politics by voting for a party which hasn't got a hope of even getting 10% of the vote. In the last election because of the CPA, a marginal vote was split and the BNP got into parliament.

Their manifesto is so vague. There is no mention of how they are going to pay for anything. They talk of decentralisation of large companies but how?

In Brighton it is a completely wasted vote.

On saying that, the beauty of a democracy is that you can vote for whoever you like so who am l to say don't vote for them...

bowsk,
Because CPA is Pro-Life, one innocent human life is worth a national debt!!!

Respect for human life should colour the whole of politics and is about much more than just being against abortion and euthanasia. A genuinely Christian political party would need to have policies firmly grounded in the social teachings of the Catholic Church.

Which puts an obligation on the rest of us to know what those teachings are so that we are in a position to make a judgement.

just been to the polling station and voted for the Christian Alliance Party. Their logo is the outline of a simple wooden CROSS (that's right next to the box where you put your cross on the polling paper) and next to that it says, 'recognising the Sovereignty of Christ as King'.

Having read their policy documents (it reads well and goes against teh secular tide) I hope these people get into Brussels and start flexing their political muscles!